A Basic Introduction To Online Dungeons & Dragons For Rookies 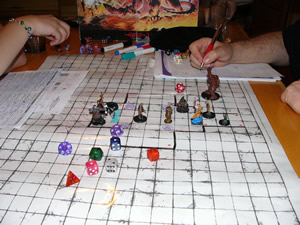 Dungeons & Dragons is the number one roleplaying game in the world.Our guide will help you decide whether playing D&D online is something you’ll enjoy

Since the world’s number one role-playing progressive storytelling game can now even be played online, we’ve decided to put together a very basic guide to what Dungeons and Dragons (D&D) is all about, as well as an introduction to some of the more commonly used lingo.

This guide is essentially for someone either only vaguely familiar with the concept of the game, or not familiar with any of it at all.

D&D Is Different – Here’s Why

D&D is different from most other games in that:

The Basic Components Of A Game

The basic components of a game of D&D differ slightly from the typical video games or those that feature AI technology, instead they include:

Welcome To The Adventure

Every game of D&D is an adventure. And no matter whether it’s an epic struggle against a natural disaster, or a primitive crawl-around in the dungeon, every D&D adventure can basically be broken down into three sorts of encounters:

The Role Of The Dice

Whenever failed actions have consequences determining the procession of the game, a dice is rolled to determine those outcomes. Rolling dice is incredibly fun and introduces elements of luck and tension and suspension into the adventure. It’s a lot like playing at one of the online casino India have to offer.

The D&D die (singular of dice) rolled to determine outcomes is called a d20. The result, along with the addition of a selection of relevant modifiers, is then compared to a specific “target number”. Target numbers are in certain instances determined by the Dungeon Master, and in others defined by the core rules of the game.