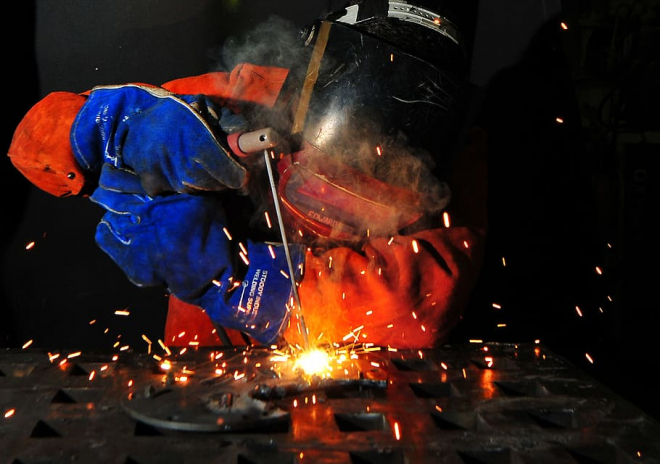 Plasma drills are often used to cut through conductive material such as aluminium, cobalt, stainless steel, copper, or brass.

A Plasma drill is a drilling device that utilizes plasma cutting technology to cut through a conductive material. The material is cut employing an accelerated jet of hot plasma; hence it is a valuable tool for manufacturing finished parts.

How Does a Plasma Drill Work?

As mentioned previously, a plasma drill works by using an accelerated jet of hot plasma. But what is plasma? Simply put, plasma is another state of matter besides solid, liquid and gas, in a super-heated form. When heated, the plasma losses electrons to form ionized gas – a conductive gas heated to 30,000 degree Celsius.

The ionized gas (plasma) creates an electric channel from within the plasma drill into the material subject and back to the plasma, creating a complete circuit. Compressed gas such as oxygen or inert gas, depending on the material being cut, is used to achieve this. This compressed gas is applied with great focus through a high-speed nozzle.

The contact between the compressed gas and the work material produces an arc within the electrode; the arc serves to ionize the compressed gas, thus creating an electrically conductive plasma channel. When the current passes through, the plasma gets heated sufficiently to to melt the workpiece.

Hence, plasma technology is utilized in various industries such as construction, automotive parts, manufacturing and scrapping. The wide use of plasma drills can be seen in computerized numerical control (CNC) industries as well as small scale industries. Plasma cutting technology can be used to cut through steel with a thickness of 38 mm using hand-held plasma torches and up to 150 mm using larger computerized tools.

Safety Concern with Use of Plasma Technology

The most significant advantage of plasma drills is their capability to cut through conductive material; they can also cut through medium to large thickness aluminium sheets. What makes plasma drills more superior is the ability to use low energy input and produce high-quality output.

Plasma drills are also cost-efficient in the long run as they provide high cutting speed, which is far greater than what an oxyfuel can provide. Moreover, plasma cutting can be computerized through CNC technology.

Additionally, plasma drills can be used underwater; hence they also provide the benefit of low heat exposure and noise levels. However, it is essential to note that underwater cutting comes with a restriction of 120 mm thickness, whereas dry cutting can be used for up to 160-180 mm thickness.

Plasma cutting had its humble beginning in the 1960s as plasma wielding; by the 1980s, the technology became a widely used tool and was seen in every industry. The rise in popularity of plasma cutting technology can be owed to the precise cuts with minimal metal shavings compared to the traditional metal on metal cutting tools.

Incorporating CNC technology between the 1980s and 1990s further popularized plasma cutting as it allowed for more precise, accurate and high-quality end products to be produced. This amalgamation of CNC and plasma technology allowed for the production of uniquely shaped cuts, which were extremely hard and inefficient to produce manually.

There have been further advances in the nozzles in recent years to produce higher precision laser-like beams, which provide a flawless end result.

On the other hand, mechanical plasma cutters are used for larger projects as their scale is far greater than manual plasma cutters. A mechanical cutter comes with a table and other equipment that renders them difficult to use for beginners.

A Deeper Understanding of Mechanism behind Plasma Cutting

Oxy-fuel makes use of the combustion of hydrocarbon compounds and oxidizes them to generate heat. Like other combustion, processes, oxyfuel is easy to transport and use. Most of the processes do not require an electrical source or a cooling system. Oxy-fuel is used to cut low-alloy and unalloyed materials.

On the other hand, laser cutting is the most advanced and latest method of thermal separation. The laser producing machine consists of a resonator containing a resonating gas and the laser beam is created within the resonation chamber. The quality of the end-product and the precision depends significantly on the purity of the gas within the resonating cavity.

For a high-performance system, nitrogen gas is recommended. It is vital to ensure that the system is free of vapours and solvent particles as it can disrupt laser beam production. While it is recommended to use nitrogen gas for high-performance systems and for cutting materials made of aluminium and nickel alloys, oxygen is advised to be used to cut low-alloy and unalloyed materials.

Water is the primary source of coolant in various industrial processes; the same applies to plasma drills. Plasma cutting uses an injector to inject the coolant into the arc between the nozzle and the material. This significantly increases the temperature to 30,000 degree Celsius or above. This high constriction that results due to water injection allows better quality cuttings and a greater cutting speed.