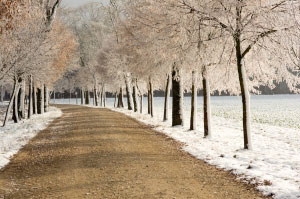 As winter approaches, we need to prepare for the change in the weather.

Many places in the USA suffer very heavy snowfalls during winter, and this presents a challenge in keeping drives and pathways clear of snow. Getting up to do the school run or go to work and having to clear a load of snow from the drive first is not fun, but it has to be done, so out comes the old snow shovel. A shovel is OK for removing a few patches of snow, but it is slow and can be hard work, so what’s the alternative?

The snow blower is your answer, and these clever machines are fast becoming a must-have item for both households and businesses. Snow blowers look like ride-on lawnmowers, and you have likely seen large examples used by municipal divisions to clear away snow from town and city streets. They do the job fast, moving a lot of snow in a short time, and there are now domestic versions available that are suitable for home use.

You know what a snow blower does, but how does it do it? Below we will explain the various components of the snow blower, but before we do, we need to explain the different types, so let’s have a look at these in brief.

So, a snowblower clears away snow, and it does so efficiently. However, there are two distinct types of snowblower that you can buy commercially. These are the single-stage and two-stage snowblower. There is a distinct difference between the two, so let’s explain this to get things clear.

A single-stage snowblower removes the snow in one simple process. It has an auger at the front – we will explain this in detail in a moment – that picks up the snow and directs it into the chute from which it is thrown. The auger is effectively a paddle system powered by the motor. Note that with a single-stage model, the auger will touch the ground. This makes this type of blower less effective on uneven ground.

With a two-stage snow blower, the auger still does this job, but instead of pulling in and throwing the snow, it sends it to a device known as an impeller, which completes the job. Now the impeller – again, we’ll talk about these in detail – allows the auger to remain out of contact with the ground, so these models are the ones to use on uneven or unpaved ground.

Additionally, you can choose between different power levels, and while some snow blowers have a snow chute that is adjustable, others have a fixed arm chute, and you’ll find reviews of snow blowers at a good price at that website. So, that’s the different types; now let’s talk about what’s inside the snowblower, starting with the auger.

The central part of the inner workings of both types of domestic snow blower is the auger. This is the part that picks the snow from the ground and throws it either directly to the chute or to the impeller. The auger usually resembles a set of paddles on a wheel or roller that rotate to pick up the snow. The rotation is powered by the motor, which also powers the wheels for movement.

The auger will be controlled from the motor by a set of gears. In many models, it can be engaged and disengaged for safety reasons. It is generally made of a form of plastic that is strong enough to withstand the hard wear and tear it will undergo.

The size of the auger will determine the clearing capacity of the model, so it needs to be considered when choosing. Now, as we said above, the single-stage, straight to the chute machine allows the augur to come into contact with the ground, which is not suitable when the terrain is rough or unpaved. This is why the 2 stage machines are fitted with an impeller, which we will describe next.

The impeller is an essential part of the 2-stage snow blower and is the mechanism that makes this sort of machine faster and more capable than the alternative. What is an impeller?

Think of an impeller as a large and powerful fan. It sits behind the auger and, like that mechanism, is driven by the motor via simple gearing as the auger throws the snow into the impeller, the spinning motion of the blades blasts it out of the delivery chute far more powerfully than in the single-stage designs.

This design allows the auger to remain above ground, with a small scoop bringing the snow into the machine. Hence these are used where there is heavy snowfall in the USA as well as on sports fields, larger gardens, and any areas where the ground may be too uneven for a single-stage machine. Now we need to talk about the motor, so that comes next.

Powering the snowblower will be a small but powerful gas motor. This needs to be of a sensible power level as it needs to drive the machine as well as powering the auger and the impeller at the same time. There are some models that are powered by electric motors with powerful batteries. These are becoming more popular as they tend to be lighter and easier to use, and many people prefer them to the gas models, which remain the most common for now.

In order to ensure you are using a snowblower safely, it is essential you understand the type of engine you are using, and especially how to make sure it is switched off when you clean the auger. The gas motor will usually be around 200cc and put out enough power for all purposes, while the electric model may have a motor that gives up to 2500watts of power, which will be more than enough.

The reason why electric motors are becoming more popular in snow blowers is that they shut off immediately when instructed, and they are also lower maintenance than a gas-powered model. The choice is an individual one and depends on the intended use of the machine.

So now you know all about snow blowers and what they are for, as well as having some understanding of the inner workings of these clever machines, what more is there for us to say? Let’s have a brief conclusion, to sum up.

It’s fair to say that in many areas of the USA – especially those with greater than average snow fall – a snow blower is a great choice and a worthy investment. They cut down on the time and effort required and – when all is said and done – are actually relatively simple machines that require very little maintenance. Clearing blockages are usually the main job that needs carrying out and can be done very easily after ensuring the machine is switched off and the power supply isolated.

All that is left to say is that while these machines do make the job easier, always be aware of safety in cold weather as it may be colder than you think, and don’t attempt to clear snow for longer than you feel comfortable with.