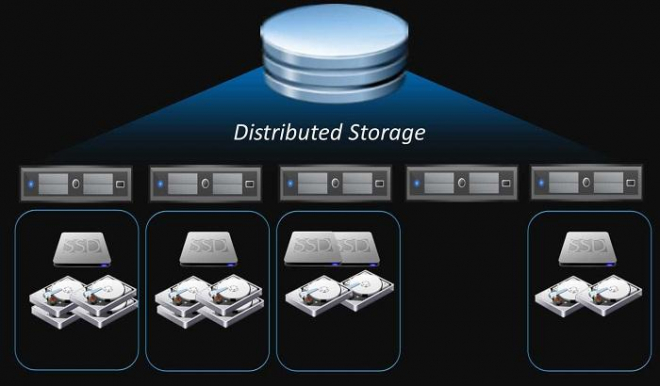 The digital age is a time where information has become a fundamental part of achieving our goals. The demand for storage is increasing to save photos, videos, documents, and other kinds of data files. The generation of information by individuals, companies, organizations, and smart devices has a growing trend, and traditional storage systems cannot cope with this continuous demand.

That’s why Cloud Engineers used to refer to distributed storage, a new concept that adapts to this growing need for scalable and flexible storage resources.

What is distributed storage, and why is it so important?

Distributed storage uses a computer network to store data, where data is stored on more than one node or server. This system allows greater flexibility and better performance when handling and accessing the selected data while increasing information security.

The main features of this data storage system are:

How it differs from traditional systems (SAN & NAS)

There is an initial hardware investment with SAN and NAS systems, whereas distributed storage systems use standard servers, drives, and networks, minimizing the infrastructure cost.

Traditional storage systems can be scaled up to a limit (such as the number of disks that can be added to a NAS). In contrast, there are virtually no limits to expand capacity (with a cloud design, new nodes are added, and the cluster grows).

Unlike NAS and SAN systems, a software-distributed storage system ensures that data is partitioned and replicated, increasing data integrity and recovery options in the event of a problem.

The main benefits of distributed storage are:

There are different types of distributed storage systems that allow the creation of independent and decentralized systems. Some of the most commonly used methods are:

This system connects all devices into a single distributed file system based on a peer-to-peer (p2p) protocol. Like the way BitTorrent works, it allows users to search the network based on the content of the data (not the location of the data) and acts as hosts storing third-party data. It uses technologies such as HST and version management systems such as Git.

This storage system uses multiple hard disk drives on which information is distributed and replicated. Different types of Raid systems, such as Raid 0 to improve performance, Raid 1 or mirror mode to mirror data identically on other disks, or Raid 10, which combines both types of Raid.

A file system for NAS allows multiple file servers to be aggregated over an Ethernet network or a large network file environment in parallel. GlusterFS is developed under the GNU license system, so it is free and can be used using both physical and virtualized servers.

Ceph is an open-source software-based distributed storage technology that is becoming increasingly popular in a wide variety of cloud orchestration systems.

Implementing Ceph on servers is very simple and offers a solution that efficiently manages data in a distributed manner. Despite being a relatively young project, it is an established option. It has a great deal of support on the web, including manuals and various information about its installation and configuration.

Ceph is composed of various components that give it functionality such as the OSD (object storage daemon), Monitor (to monitor the status of the cluster and all components), Metadata Server (to reduce cluster load) and Managers (to manage different aspects such as space utilization).

Managing distributed storage systems with Ceph is a cost-effective and efficient solution that can be easily implemented.

VMware is a virtualization tool that has become a global standard. With VMware, you can virtualize operating systems and create storage architectures in data centers by separating storage management and distribution from physical hardware. This tool offers a flexible, automated, and scalable storage solution that adapts to the needs of today's applications.

With VMware, you can create a software storage system (SDS) where applications are dynamically distributed, allocating the necessary capacity and performance resources. In VMware, the virtual machine and the application become the storage management and distribution center.

With this system, storage resources can be increased without disruption to the system. In addition, application-specific storage services can be created.

Data storage has been evolving to meet the needs of individuals and businesses. The world is where the high demand for storage requires a change in the traditional approach with a specialized and independent storage system. Distributed storage is the solution to get systems up and running faster and more efficiently, without losing any data files.

This storage system makes better use of resources, decreasing storage costs and increasing security and agility in data management and access.

Simultaneously, distributed data storage, along with distributed computing, is one of the main trends in data storage. Many projects are still at an early stage of development and hypothesis testing, so it is too early to talk about real competition with centralized storage services. But if the growth dynamics continue, this technology will compete with others. And the main parameters of competition will be speed, scalability, security, and low cost of services.