AND Digital Arrives in Manchester 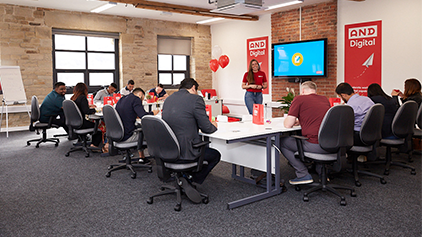 AND Digital to create 60 new jobs in Manchester.

London-based tech startup AND Digital has recently launched its latest office in Manchester.

The new club, which has been named after Mae Jemison, the first woman of colour to travel in space, will create over 60 new jobs in the next year. Club Jemison will build on the success of Club Kilburn, the company's first Manchester-based club launched in 2021, with the goal to meet the company's long-term plans to build a northern hub.

Paramjit Uppal, CEO and founder of AND Digital, said: “Manchester is the fastest-growing tech hub in Europe currently, with around £527m of funding being funneled into companies based in the city. Not only does this present AND with an enormous growth opportunity, it also means that we can make a much bigger impact in helping clients accelerate their digital delivery while closing digital skills gaps in the region.”

Rick Royce, who was appointed as Jemison Club Executive, said: “Manchester is synonymous with innovation, technology, and is even considered the birthplace of the first modern computer. Not only is it currently home to six of the UK’s 14 tech unicorns, but it also offers a rich and diverse pool of tech talent given the close proximity of some of the UK’s leading universities. As a result, it’s only natural that AND Digital would want to expand its presence in this thriving tech destination.”

AND Digital currently works with clients across a range of sectors, including telecommunications, media, financial services, hospitality, retail and the public sector. It has 13 clubs, including the newly established international club in Amsterdam.