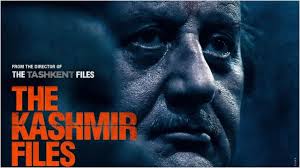 The Kashmir Files, a controversial film directed by Vivek Agnihotri, has generated a lot of talk and traction since its premiere.

The Kashmir Files, a controversial film directed by Vivek Agnihotri, has generated a lot of talk and traction since its premiere. The film depicts Kashmiri Pandits' misery and persecution during their exodus from the valley in the winter of 1990. For the script of the film, over 700 emigrants from the exodus were interviewed. Director Agnihotri claims that the movie is based entirely on facts. Pushkar Nath Pandit is one of the important characters of the film that is played by Anupam Kher.

According to the narrative, Pushkar’s family is a victim of violence and is forced to flee their home in Kashmir. If you missed the movie in theatres, you can see it now on the internet. The Kashmir Files will be available on ZEE5 in Hindi, Tamil, Telugu, and Kannada, among other languages. Zee Studios, along with Tej Narayan Agarwal and Abhishek Agarwal, Pallavi Joshi, and Vivek Ranjan Agnihotri, is producing the film.

The scars of the exiled Kashmiri Pandit community remain unhealed for 32 years, still in hopes of returning to their homeland one day. The widely debated circumstances of the forceful evacuation of Kashmiri Pandits between January and March 1990. Not only that, the numbers and problem of their return, are a major aspect of the Kashmir saga that has fed into Hindu-Muslim divisiveness in India over the years. This also fueled the Hindu-Muslim divide in the Valley.

Thousands of people gathered in mosques across the valley, chanting anti-India and anti-Pandit chants. This is where the Kashmiri Pandits' exodus began where hundreds of innocent people were tortured, slaughtered, and raped over the following months. By the end of the year, over 350,000 Pandits fled the Valley and sought safety in Jammu and other places. Only a few Pandit families decided to stay back and continued to endure harassment by the terrorists.

The film is based on one of Kashmir's most dreadful tragedies, which occurred 32 years ago. As a result, the filmmakers intended to put The Kashmir Files on a digital platform to unveil the truth to more people. The movie got a theatrical release on March 11 and made quite a buzz about the horrifying truth of the exodus of Kashmiri Pandits. ZEE5 has purchased the streaming rights to The Kashmir Files. So the film will premiere on the streaming service on May 13, 2022. Members of ZEE5's premium service will have quick access to the film online.