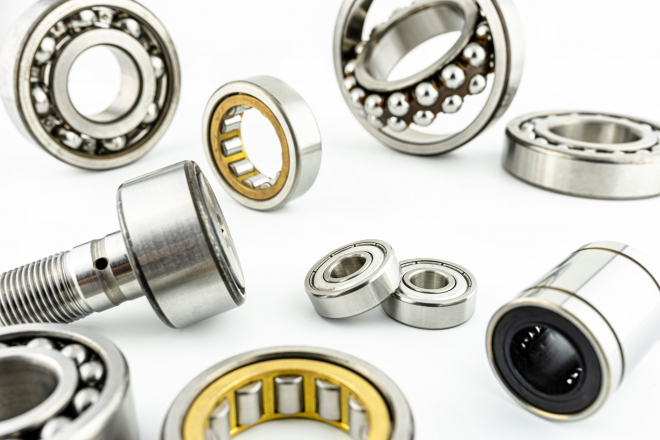 Ball screw systems provide a solution for applications where rotational motion must be transferred efficiently into linear motion.

They can be manufactured using two different processes: rolling and precision grinding. Depending on how the bearing threads are fabricated, ball screws offer varying degrees of precision and repeatability.

How Do Ball Screws Work?

The operation of a ball screw assembly is similar in some ways to the way a conventional lead screw works. The primary difference, and what gives ball screws their distinct advantage, is that these components feature ball bearings running in helical channels to allow for transferring loads. The ball bearings roll along the track, eliminating sliding friction, and continuously recirculate through the ball nut to distribute the load and pick up lubrication. This manufacturing strategy allows ball screws to operate with minimal internal friction, and it's that lack of friction that allows them to offer high rates of efficiency and accuracy even at high force loadings and torque.

What's the Difference Between Rolled and Ground Ball Screws?

On the surface, rolled and precision ground ball screws serve nearly identical functions in a wide variety of mechanical applications. Both options are similar in appearance, as well. Each consists of two basic components: a lead screw and a ball nut. The primary difference between rolled and ground ball screws is a result of their disparate manufacturing processes, specifically when it comes to the threads.

Ground ball screw threads are created through abrasion. The material blanks rotate on a long axis between two very hard abrasive cutters designed to fabricate just a few threads at a time, carving them out from the cut blanks. The blanks are then cut to their final length before grinding.

These two different manufacturing processes may produce similar-looking results but rolled screw threads are generally stronger. This added strength is offset by the fact that they tend to have rougher surface finishes, which can be problematic in applications that require low friction and high rates of mechanical efficiency. Rolled ball screws are also more vulnerable to dimensional distortions, which can lead to excessive backlash and decrease positional accuracy.

Ball screws are used in a wide variety of applications, from machining to the aerospace industry. Let's take a look at a few of the most common industrial applications for ball screws to identify which of these screw manufacturing processes will provide a better fit for each.

Precision X/Y positioning tables are widely used in manufacturing, inspection, and research applications. They come in a variety of shapes, styles, and designs, but most employ the same kind of ball screws. They feature precision ground ball screws that allow the machines to achieve high rates of accuracy and precision, often within one microinch. The use of ground ball screws in this application also allows for higher rates of repeatability.

Step photolithography machines are used to fabricate the cutting-edge integrated circuits that have driven humanity's advances in raw computer power in recent years. To accomplish this goal, which involves manufacturing microscopic components, photolithography harnesses the reactions caused by exposing a thin film of substrates on silicon wafers to light, etching geometric patterns onto the silicon wafers to form the foundation of the integrated circuit.

The stepper controls the location and position of the light, so it must operate with a high degree of precision on a microscopic scale. All photolithography machine steppers feature high-precision ground ball screws paired with servo motors and harmonic gear reducers to accomplish this goal. Rolled ball screw assemblies simply can't attain the same levels of precision.

While most Americans have never even seen a step lithography machine or a precision X/Y table, let alone used one, just about every adult has taken advantage of at least one system that features rolled ball screws: automotive power steering. The typical power steering system doesn't operate with the same precision and repeatability as the more specialized pieces of equipment described above. As a result, rolled ball screws are a more cost-efficient option for car manufacturers.

The way power steering works is by transferring the rotary motion applied to the steering wheel by the driver into linear motion within the pressurized power steering fluid system. The steering wheel engages the leadscrew. The rotary motion is converted into linear motion in the corresponding ball nut, which acts as a piston, engaging with the car's Pitman arm via teeth on its underside. The Pitman arm links the power steering box to the center link component that moves the actual wheels. The end result? The whole system functions as intended with adequate precision to get drivers down the road safely.

How to Choose the Right Ball Screw

Ball screw assemblies play an essential role in modern life. They can be found in some form in almost every machine or piece of equipment that requires transferring rotary to motion to linear motion, but every application is a little different. While precision ground ball screws are common in the tech sector, the average American will come into contact with far more machines that feature simpler rolled ball screws in his or her lifetime.