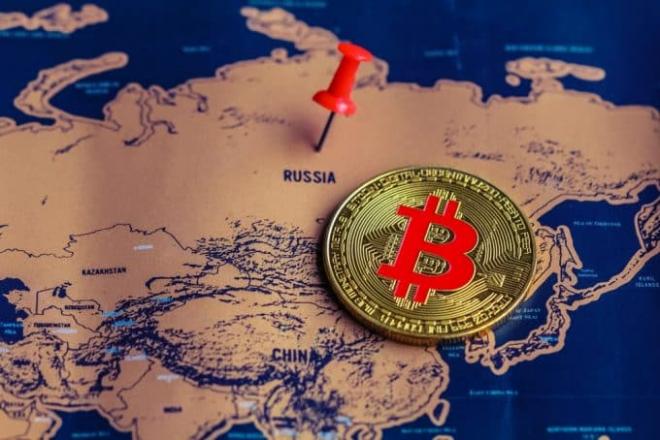 Over $200 billion was wiped out from the crypto market which painted a picture of red when the first reports of Russia attacking Ukraine emerged.

For all the talk surrounding Bitcoin sliding below the sacrosanct $30000 support level and the broader crypto market hitting a fresh bottom in the wake of the growing geopolitical tensions in Eastern Europe, the bellwether currency surged nearly 15% in less than 24 hours. The price was languishing at $34000, but, out of nowhere, it went on a rampant run breaking through all the resistances on the upside. The sudden sharp surge ended at $39720 where the leader of the crypto pack found extreme selling pressure causing the weak hands to wither off. Since then, Bitcoin has been hovering around the $38000-$39000 levels with the price contracting in range- a typical price action pattern that indicates the rally is most likely to continue. Now all that it takes for Bitcoin to tide over the psychologically key $40000 barrier- proven to be a stiff resistance to upstage- is just another burst of sharp buying activity.

Over $200 billion was wiped out from the crypto market which painted a picture of red when the first reports of Russia attacking Ukraine emerged. The shockwaves of the Russian invasion sent crypto investors and traders scurrying for cover, putting Bitcoin and other leading cryptocurrencies under humongous pressure. As expected, the weak hands folded, driving the price lower. And, at one point, all major leading cryptocurrencies came so close to being sucked into the zone of trouble, entering which the risk of them plunging even further was more. Thankfully, Bitcoin, Ethereum and other altcoins pulled through from the sudden setback and did well to manage to finish the day in green, partly due to the fact that Russia got bombarded with serious economic sanctions left, right and center.

Not a Safe Hedge in Turmoil

The bearish downturn, well into the 14th week now, has not shown any signs of relenting so far, and now the threat of the tense Russia-Ukraine situation is looming large--taking its toll on several capital markets across the globe and the crypto markets. In fact, as the crisis in Ukraine deepened, Bitcoin slipped below $40000 and further into mid $30000s, counteracting all claims that it is a safe haven and a legitimate alternative to gold in tumultuous times such as this.

Much to the surprise of all crypto advocates who saw merit in such claims, gold kept soaring up to its highest level since July last year as Bitcoin struggled to keep its head above safe waters. Critics argue Bitcoin’s notable underperformance vis-à-vis gold in the current scheme of things is a clear signal that crypto assets are not the answer to every question as they’re purported to be.

Adding merit to Bitcoin’s comparison with stock markets is the fact that Bitcoin’s movements are more in step with major capital markets: for instance, as of writing, the Nasdaq composite has fallen 13.52% year to date, and Bitcoin is not off by much at 14.56% in the same duration. Moreover, Bitcoin has been mirroring the price action of several high-risk assets in the equity market, tracing the movements in the exact same manner. Bitcoin took a heavy battering when early reports on Russia’s attack over Ukraine came out and rallied like a force possessed yesterday to gain around 15% when the news about US imposing heavy sanctions on Russia emerged, moving in unison with several tech stocks equity in the markets all along.

A few weeks ago, the Fed’s policy making on interest rate hike was the key driver determining the direction of the market, but the ongoing conflict between Russia and Ukraine has suddenly taken its place, pushing the market deep into a state of fickleness. Although Bitcoin has climbed back up from last week’s lows and is flirting with the $40000 resistance zone, it is not the best time to trade unless you know how to position yourselves to take advantage of this fluctuating market. It remains to be seen whether BTC will be successful in conquering the $40000 level and extend its run into a bigger rally, or lose steam and descend into much lower levels. But, at the moment, as the world is closely taking stock of the emerging situation in Eastern Europe, the overall mood in the market is downcast and the sentiment can change spontaneously from one headline to the other. If you still want to play ball, you should come up with new strategies that fit the current market conditions and if possible, turn to using advanced trading tools that help you snare up genuine trading opportunities as they present themselves. Check out different trading bots that allow you to keep trawling the market round the clock for good trading opportunities. Pick one and run with it to increase your bitcoin profit. Remember it is all about choosing the one bot that helps you string together as many wins as possible without pushing up the level of risk beyond your margin of safety.