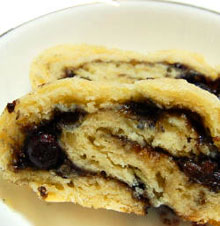 If you’re looking for the perfect warming dessert, or just a treat on a cold winter’s day, baked roly poly dessert would be a great idea.

But instead of sticking with the classic recipe, use fresh pears, blueberries flavoured with allspice and brown sugar, instead of jam, to make it even more mouth-watering.

1. Preheat the oven to 200C, Gas Mark 6. In a small saucepan, put together the chopped pears, sugar, allspice and lemon juice. Boil the mixture stirring from time to time until it’s almost jam like.

2. Remove the saucepan from the heat and mix the blueberries slightly smashing them. Add sugar if needed. Set aside.

3. Well grease a 20cm square piece of parchment paper with butter and set aside. Place the flour, sugar and suet in a bowl and mix well.

4. Add the water and stir the mixture until it comes away from the sides of the bowl.

5. Flour your hand and bring the dough together. Knead very lightly for a few minutes. You will still be able to see and feel the suet.

6. Turn onto a floured surface, flour a rolling pin, then roll the pastry out to an oblong shape that is 1cm thick and 20cm wide.

7. Spread the cooled pear mixture evenly over the dough leaving a generous 2.5cm border. Use a pastry brush dipped in cold water on the borders. Starting from the short end, roll it up pinching the edges together as you go to prevent any spillages. Press down gently to seal at the end.

Leave to stand for 5minutes.

This pudding is also tasty when served hot, and with custard.

This recipe is from Recipes4us.co.uk.