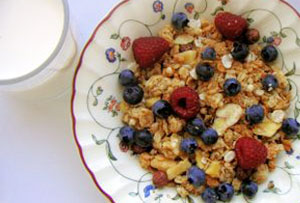 Many people will have heard the saying that breakfast is perhaps the most important meal of the day.

Well, a study carried out by a team in the US has said that eating breakfast helps keep the heart in good shape. The research, which was carried out over 16 years, involved 27,000 men taking part.

The study, based on men from the age of 45 upwards, reflected that the men who missed breakfast had greater risk of heart problems.

During the study it is understood there were over 1,520 heart attacks that were fatal or non-fatal.

But the findings state those who missed breakfast were 27per cent more likely to experience problems related to the heart, compared to the people who had a meal at the beginning of the day.

The group from Harvard School of Public Health said that skipping breakfast can lead to ‘extra strain’ on the human body.

Researcher Doctor Leah Cahill told the BBC: “The results show that something is better than nothing, but it's always better to have something healthy and balanced.”

She added that the time in which a meal was eaten could be a key point. Doctor Cahill’s conclusion was: “Don't skip breakfast”.

The study is understood to have taken other elements into consideration, such as lifestyle.

The research is in the journal Circulation.