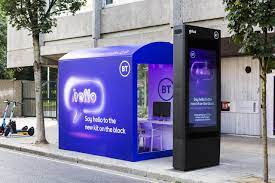 BT's application to install modern and "transformative" street hubs across different sites in Watford has been rejected by the local authority.

The telecommunication giant wanted to replace telephone kiosks with digital displays that offer free wi-fi, local information and maps, USB ports to charge mobile phones and the ability to call anyone in the UK for free on mobile or landline.

Despite the benefits they offer, Watford Local Council declined to approve the proposals to install the hubs, which have been installed across the country.

A council officer's reports deemed the hubs to be visually "harmful", "excessively dominant" and "clutterous".

The report added that the hubs would cause an obstruction for pedestrians and cyclists, particularly near bus stops and where people queue to catch buses to Warner Bros Studios from Watford Junction. The council has also confirmed that five locations have been rejected with one The Parade still pending.