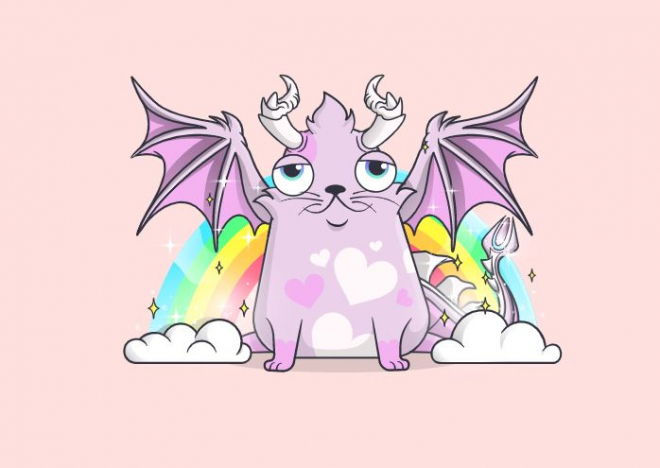 Pudding Daintytot is a super cute pink kitten with colorful heart patterns dotted all over its chest.

With bulging eyes and dragon-like horns, wings, and a tail, it looks straight out of the animation movie “How to train your dragon?”. A rainbow in the background completes the fancy avatar of this virtual cartoon cat.

Pudding is one among the hundreds of animated cats in Cryptokitties, the famous blockchain game that first burst onto the scene in 2017. No cat is purrfect (no pun intended) in this special cat-verse. Each one is crazy in its own way and has a strong, kooky personality.

Pudding is no different. It is truly one of a kind. Literally. I mean, its appearance, traits, genes and virtually everything about it is singular and special. And that list does include its hefty price tag, as well.

Last time I checked, this animated kitty was up for sale for 999+ ETH (Ether) which roughly translates to £2.5 million. Now, I can guess what you are thinking. Who on the face of the earth would pay a million dollars for what basically amounts to an imaginary cat? I know you would nod in agreement. But let me give you a fact. There’s a strong market for digital cats on the internet, and it’s getting bigger and bigger. I’m not kidding. Check out this story of a cat fetching 600 ETH in 2017 (roughly £500l back then) to see for yourself everything that makes these cats so precious, and to get a sense of where things are headed in the digital collectible space.

From a few hundred grand to almost £2.5 million, some cats from this crypto-game have come a long way indeed. But what is so special about this game that makes people spend so much? It’s the game itself, and the concept of NFT which has exploded like crazy in the last few months.

Non-Fungible Tokens or NFTs as a category may have been around for a few years in the world of crypto, but cryptokitties was the first crypto collectible platform that fuelled a mini-online craze when it launched. We’ll take a brief look at NFTs later but let’s look at cryptokitties for the moment.

Crypto insiders and pundits reckon that cryptokitties is easily one of the oddest projects to have hit the world of crypto till date. At its heart, it is a blockchain based game that lets its users collect, breed and sell adorable animation cats. It accounts for a huge share of all traffic on Ethereum, which is second only to Bitcoin in popularity.

The game has multiple layers to it, and its own share of algorithmic rules that determine the trading and breeding of kittens. So, a fitting description to crypto kitties (as a platform) is that it’s a three-way cross between toy fads like Tamagotchis, physical collectibles like Magic:The Gathering and proper animal husbandry techniques.

Each kitten represented by an NFT is authentically one-of-a-kind. Rare kittens such as Pudding, which boasts distinct traits inherited from some of the oldest bloodlines in the crypto kitties family, are unique. No surprise, they command a huge price and are often bought and sold for a massive sum.

There are plenty of other reasons to love this game but what appeals to me as a crypto enthusiast is the manner in which they show how NFTs can be used in games. Non-Fungible Tokens, as the name indicates, are not fungible and not interchangeable like the cryptocurrencies. They are often tied to an out-and-out unique digital asset, and they could be anything from digital artwork to memes to popular Nyan cat gifs. Just like Bitcoin and Ether (the cryptocurrency used on the Ethereum blockchain), users can trade digital kittens (the NFTs in the context of cryptokitties), and also breed them if they want. So, whenever a kitten like Pudding is sold, a certificate of ownership confirming its authenticity is stored within the digital ledger on the same blockchain in addition to the usual transaction record.

Another thing worth noting is that this crazy cat game is not like the average blockchain game. Cryptokitties is one game that currently lets you to have NFTs as items and gives users a taste of what it means to own digital assets. For the uninitiated, this game is built on the premise that digital assets (virtual cats) are supposed to be owned by users not the game developers and this stance brought about a radical shift in the way everyone in the gaming ecosystem looked at in-game assets. It runs on Ethereum, which, by design, can store much more complex information besides doing what a blockchain is meant to do: facilitate decentralized transactions. And that pretty much throws open the possibility of having an NFT, which, is seeing an unprecedented growth of late giving digital creators and artists a sense of renewed energy. The game developer, Dapper Labs, rightly tapped into this functionality to create a feature-rich crypto collectible game which gave a whole new dimension to digital ownership.

Wrapping up, cryptokitties can be thought of as mere digital representations of collectibles like basketball cards. But it was not designed to be just a fresh take of physical collectibles on a new platform. Cryptokitties put on the map what is now a billion-dollar market: the NFTs. It would not be an exaggeration to state that NFTs rose in popularity on the back of cryptokitties. At the time of launch, the game was groundbreaking in many ways and even proved that crypto could be a torchbearer towards creation of an economy where digital assets are at the forefront. The success of cryptokitties and in turn the NFTs has given crypto gaming companies a lead to follow and hopefully in the near future there will be many more crypto games and applications that reinforce the idea of digital collectibles and ownership.