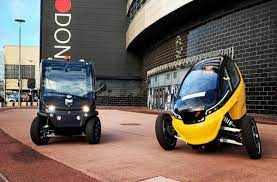 Milton Keynes to launch a major trial of driverless cars on public roads later this month.

A major trial of driverless cars on public roads is scheduled to take place in Milton Keynes later this month. The government-backed scheme will see the use of the Fetch car system that allows people to order a car through an app.

To ensure safety, a driver will be initially in every vehicle until such time that the system is perfected.

Koosha Kaveh, the chief executive of Imperium Drive, the company behind the trials, said: "It's driverless but not autonomous,"

"There's still a human involved, but they'll be sitting in a control centre controlling the vehicle in the same way you would control a drone."

"We're working towards making remote driving safer than normal driving. In normal driving you still have blind spots around you that cause accidents. You also can't anticipate what's coming in terms of traffic, pedestrians, cyclists.

The head of Transport Innovation at Milton Keynes Council, Brian Matthews, said driverless cars will be commonplace in the town within two years.

"We've been working at this for a number of years. We want people to move away from single occupancy cars.

"We're looking a range of solutions not just these driverless cars, but also larger shuttles using similar technology and four-seater pods that are completely autonomous."