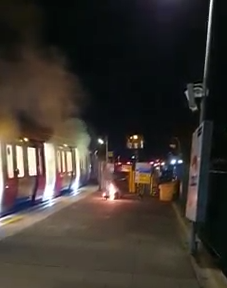 E-scooters: Fire on Tube proves to pose a significant threat to the traveling public.

Lorraine Ward, TSSA Organising Director, is calling for "an immediate halt to transporting them (e-scooters) on all TfL services until more research into these batteries has been carried out,"

The comment follows an incident in which an e-scooter's battery was caught on fire on the tube and then continued to burn on the platform.

Passengers, who were forced to abandon the service at Parsons Green station in west London on Monday, can be heard coughing and gasping for air as smoke escapes the carriages due to the incident.

Commenting on the issue, London Fire Brigade said that lithium-ion batteries use in e-scooters are susceptible to failure if the wrong chargers are used.

"We also know many of these incidents involve batteries which have been sourced on the internet, which may not meet the correct safety standards," a LFB spokesman said.

"Batteries can get warm during their use and it is advisable to allow them to cool down before attempting to recharge as they could be more susceptible to failure."

Lorraine Ward added: "Without a doubt the incident at Parsons Green raises very serious concerns. It's becoming all too clear that e-scooters pose a significant threat to the traveling public, our members and all workers at TfL,"