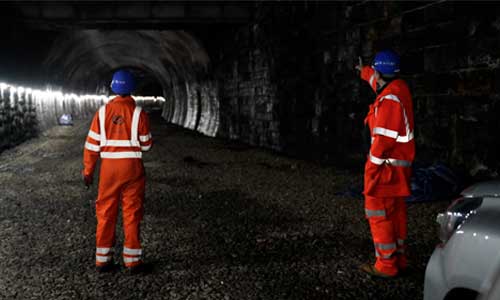 Constructed in 1986, Balgray Tunnel is a 640m long tunnel and is part of Lanarkshire and Dunbartonshire Railway. It was permanently closed in 1964 but requires regular safety inspections.

The National Highways were previously utilising various techniques, such as visual inspections, drilling and penetrating radar to highlight potential issues. Recently, they have used a process called muon imaging that harnesses cosmic rays from space to create powerful x-ray like images.

National Highways HRE programme head Helene Rossiter said: “Ensuring all our structures remain safe and in good maintenance is our priority, and we’re very eager to see the results of this unique technique and evaluate how it might help us carry out some of our tunnel surveys more efficiently in the future.

“Inspections of all our historic railway tunnels are a key part of the maintenance routine and if the Balgray Tunnel trial is successful we could look to use the technology in other tunnel surveys in the HRE.”

Geoptic technical director Lee Thompson said: “Geoptic is delighted to be working with National Highways to provide the first HRE muon tunnel survey and we hope this is a collaboration we will be able to continue in the future.

“Before the survey started, we needed to develop a digital twin of the tunnel using detailed geological data which informs us how many muons we expect to see at any point in the tunnel. Then, inside the tunnel, we use our instruments that detect muons to measure the number of muons at different points.

“Differences between what we expect to see and what we actually observe can be interpreted as differences in density in the structure of the tunnel compared with that we assumed in our digital twin. As well as identifying hidden voids and shafts our instruments can return valuable information on the shaft position, size and extent.”