How to Stream Pre-Season Football Games this Summer 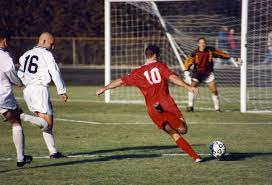 The 2022/23 football season is just around the corner and clubs across the world are busy preparing for the challenges that lie ahead.

The 2022/23 football season is just around the corner and clubs across the world are busy preparing for the challenges that lie ahead.

Pre-season is a hugely important time, as it gives clubs the opportunity to get their squad up-to-speed, bed in new signings and formulate how they want to play during the campaign.

With many clubs heading off on overseas tours, many fans rely on live streaming services to follow their progress during pre-season.

We have worked hard on your behalf to produce a reliable list of football streaming sites where you can watch pre-season football games this summer.

Initially launched as a football streaming site, fuboTV has since expanded its offering to become one of the leading sports-focused live streaming services in the world.

It remains one of the best places to find live football streams, offering comprehensive coverage of matches during the pre-season period.

fuboTV is available on the web or via dedicated apps for iOS, Android, Apple TV, Fire TV, Chromecast and Roku devices.

All football streams are uploaded around 30 minutes before the advertised kick-off time, and can be accessed across a wide range of digital devices.

We recommend using Virtual Private Network (VPN) software to access First Row, as some streams are geo-blocked in selected jurisdictions.

While the design of the HesGoal site leaves a lot to be desired, it does offer superb access to live football streams from across the world.

Pre-season games featuring clubs from the Premier League, La Liga, Serie A, Ligue and the Bundesliga are all available on the site.

Fans can also access live streams from lower-ranked countries not usually found on other sites, making HesGoal a sensible choice if you are looking for something a little different.

SportRAR is an excellent resource for finding live football streams for games taking place in the United Kingdom, Europe and further afield.

The platform works particularly well on mobile, with the slick design making it really easy to find reliable streams of pre-season games.

SportRAR also has a handy section on the site where it provides links to the best sports broadcasters from across the planet.

While Stream2Watch does offer loads of live football streams, it is worth noting that the site does feature annoying pop-up advertisements.

If you are prepared to overlook this element, Stream2Watch has thousands of live football streams available throughout the year.

With no geo-blocking restrictions in place, Stream2Watch is great for streaming live football games once you have navigated past the ads.

One of our favourite streaming resources for watching football on mobile is Live Soccer TV, as it is available as a downloadable app for Android and iOS devices.

It features matches from across the world by aggregating live streams from the most reliable online streaming services in the business.

With an in-depth news section providing regular updates for fans, Live Soccer TV should be high on the list of streaming sites you visit.

The final entrant in our streaming guide is CricHD - a site that was initially better known as a cricket platform before expanding its operations.

With CricHD generally listing streams from tried and trusted broadcasters, fans can be sure they are accessing trustworthy content.

As we mentioned earlier, it is advisable to use VPN software if you are planning to click on any live streaming links to watch pre-season games.

A VPN changes your IP address, meaning you can access content that may otherwise have been blocked from your jurisdiction.

We rate ExpressVPN as the most reliable VPN on the market due to its ease of use, speed and superb security features.

It is compatible with most streaming devices including Android, iOS, Fire TV, Apple TV, Xbox and PlayStation.

With a 30-day money-back guarantee also thrown in for good measure, ExpressVPN is a sure-fire winner for fans who want to stream pre-season games.