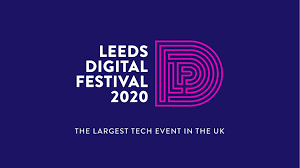 Leeds Digital Festival's organiers were able to put a total of 134 online events between April 20 and May 1. The number was anticipated to reach a maximum of 50 but has increased dramatically after organisers had to make an eleventh-hour pivot following the lockdown. The events tackled a wide range of subjects ranging from fintech and artificial intelligence to remote working and putting environmental issues at the top of tech firms' agendas.

Stuart Clarke, director of Leeds Digital Festival, said: "We'd been planning our fifth physical festival for six months and were looking to announce the full line-up of events when it became apparent that a lockdown would happen which would mean the full cancellation of the festival.

"However, we're a digital festival and as Paul Berwin, one of our directors said, 'If we can't put on a virtual festival, who can?"

"We even had the launch of a new national organisation that promotes online safety with support from a Government minister.

"We're still running the numbers, but initial feedback has shown that some event organisers have seen five times the number of attendees from their usual numbers.

"We also had attendees from over 30 countries around the world."

He added: "It was interesting that only 53 out of the 134 events were originally planned as physical events.

"The rest were new to the festival. This suggests that we can grow the virtual side, even alongside a physical festival."