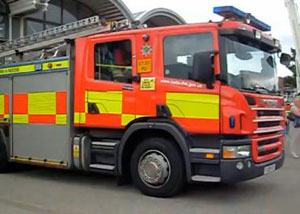 Certain professions tend to be riskier than others in both the short-term and the long-term.

When you understand more about these risks, particularly early on in your career, it provides you the opportunity to take steps to avoid them.

The following are things to know about the risks of being a firefighter, particularly over the long-term.

One of the long-term risks that many firefighters face is the development of different types of cancer, diabetes, and obesity because of their exposure to something called Aqueous Film-Forming Foam or AFFF.

AFFF is used to extinguish fires that are liquid-based, such as fires caused by gas.

AFFF contains chemicals that put you at risk for serious illnesses. The longer you’re exposed to this material, the higher your risk.

There’s something called PFAS, which are human-made chemicals that are in firefighting foam and are linked to types of cancer.

When you’re regularly exposed to PFAS, your body absorbs the carcinogenic chemicals and they then build up over time. PFAS don’t break down, so they’re called forever chemicals. The more these substances buildup in your body, the greater the risk of developing cancer.

Some of the cancers that firefighters most commonly develop include non-Hodgkin lymphoma, prostate cancer, multiple myeloma, and testicular cancer.

Studies have found firefighters have higher levels of mercury in their blood in some cases, particularly firefighters who have fought wildfires.

Mercury is considered a neurotoxin that can damage organs, including the kidneys and lungs.

Inhaling mercury vapor can cause harm to the immune and digestive systems, the nervous system, lungs, and kidneys.

There may be behavioral disorders and neurological disorders that appear after inhaling mercury.

Symptoms can include memory loss, motor dysfunction, and tremors.

According to the U.S. Fire Administration, heart attacks are the leading cause of death for firefighters who are active duty. Over the past ten years, around half of on-duty deaths among firefighters were the result of a heart attack.

Some of the risk factors that specifically link cardiovascular disease to firefighters include the fact that it’s an emotionally and physically demanding career.

The work is dangerous, the uniforms are heavy, and there’s a lot of stress. This is combined with the toxic environment of smoke and gas exposure, all of which can lead to a sudden cardiac event.

There are other lifestyle-related risk factors that significantly affect firefighters, such as hypertension, obesity, and smoking.

Firefighters can lower their risk of heart events by taking certain lifestyle steps. For example, exercising daily, eating a healthy diet, and getting enough sleep can all help.

Maintaining a healthy weight, monitoring blood pressure, and learning productive ways to cope with stress can help lower the risk of cardiovascular disease.

In the past, homes’ furnishings were typically made of natural or simple materials like wood and natural fabrics. Now, furnishings and items in homes have primarily synthetic materials. When these items burn, they give off toxic smoke. That toxic smoke can have carcinogens, and around 60% of firefighters will die of cancer according to the International Association of Firefighters.

These synthetic materials also create more smoke, so within a matter of seconds, a room can be filled with combusted gases.

The heat of the fire can also make the skin more susceptible to absorption of the chemicals.

Mental health is just as relevant as physical health, and first responders across the board often grapple with mental health issues.

In 2017, for example, a study found that more firefighters died by suicide than they did in the line of duty.

It’s not an exclusive issue among firefighters and first responders. It’s one of the top 10 causes of death in most age groups.

When someone experiences a crisis that leads them to be suicidal, the first 48 hours from the start of that crisis event are the most critical. Support and intervention may help end the crisis.

When firefighters are trained to recognize certain risk factors of suicide in themselves and their colleagues, they may be able to provide intervention.

Some of the warning sides of suicidal thoughts include:

While the above can be symptoms for anyone experiencing suicidal thoughts, there’s another issue that’s more exclusive to firefighters, which is retirement.

Firefighters often rely heavily on their network of support from their coworkers when they’re dealing with stress or trauma. When you’re an inactive firefighter, you may start to feel invisible or ignored, and that can then lead memories to come flooding back.

Even if a firefighter isn’t suicidal, mental health concerns such as anxiety and depression are common and need medical treatment as any other health condition does.

If you’re a firefighter, just as you might go for a regular physical exam with your doctor, think about doing a self-check on yourself to see how your mental health is at regular intervals.

Firefighters face unique challenges and experiences on the job, many of which can be detrimental to their health. Being proactive and knowing these risks can help firefighters take the steps they need to, to stay mentally and physically well.