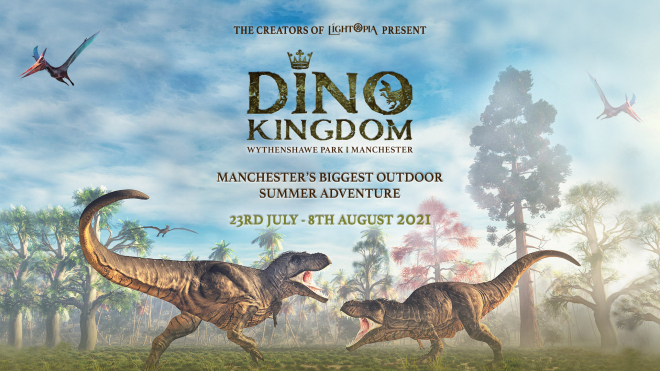 A dinosaur-themed event is coming to Manchester this summer.

Dino Kingdom is set to transform a Manchester Park with a Jurassic adventure this summer.

The event, which is scheduled from Friday 23rd July to Sunday 8th of August, has been described as an epic, prehistoric exploration that will feature more than 100 life-like moving and roaring dinosaurs. The event will be put together by the same team behind Lightopia, the award-winning light and lantern festival that came to Heaton Park.

The holiday event, which will take place at Wythenshawe Park, will allow children and adults to interact with more than 70 life-sized dinosaurs, including a huge Tyrannosaurus Rex and the biggest installation, the Apatosaurus towers which is 18 metres long. There will also be smaller dinosaurs to seek, including hatching babies and other interactive beastly beings amongst the woodland.

Advance tickets are priced at £15 for adults, £13 for children and £52 for families of two adults and 2 children.