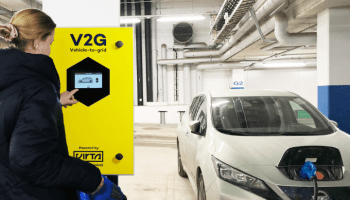 Trafford and Withington Hospitals in Manchester have joined forces to launch a vehicle-to-grid (V2G) trial that aims to help Manchester supply energy during peak hours.

The project, which is backed by Hitachi Europe, will see electric vehicles (EVs) store energy and feed it back into the grid when needed. The two hospitals will charge vehicles used to transport medication and medical equipment with five V2G chargers at night when demand on the grid is at its lowest level.

“V2G charging is a perfect example of thinking outside the box to ensure we transform how energy is used, stored and distributed in the city-region. We see projects like GM LEM as vital for reducing our carbon emissions and building a new green economy for our towns and cities.”