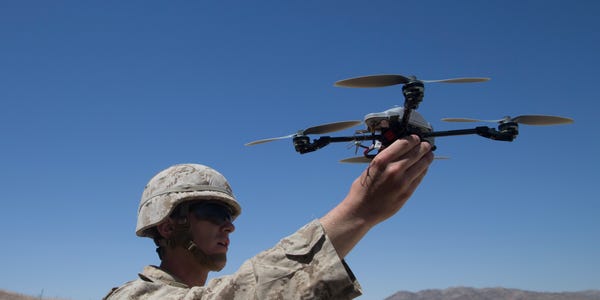 Troops at Jackton Police College in East Kilbride is testing a "game-changing" technology in protecting the Trident missiles and the machines which carry them. The system, which involves the use of drones and robots, could be used to supplement closed-quarter combat training which keeps the commandos based at Faslane Naval Base ready for action.

Captain James Spencer RM, second-in-command of P-Squadron, 43 Commando, said: "The facilities at Jackton Police College allowed us to develop a concept for the use of the Remotely Piloted Aerial System and figure out how we would integrate it within an urban environment.

"Such technology is a game-changer in the face of a threat. It informs commanders and troops on the ground and allows them to make tactical actions swiftly and effectively."

Lieutenant Charles Roberts RM, Commander of Anzio Troop, P-Squadron, said: "It can give the marine and tactical commando on the ground that extra bit of initiative to make decision quicker and better. It is all about making the marine as operationally effective as can be.

"As members of P-Squadron, 43 Commando, we conduct nuclear security missions. Part of these operations involves working in an urban, maritime and industrial environment. Close-quarters battle and close-quarters marksmanship are the tactics and techniques most suited to the mission."