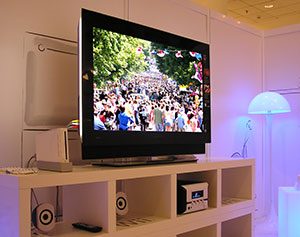 DTV or digital television offers certain advantages over an analog TV. Learn all about digital TVs as we list down some must-know DTV facts.

Are you tired of paying an arm and a leg for cable every month? The average American household is paying well over $100 for pay-TV these days—and the price seems to keep on going up every single year.

If you've had enough, you should consider canceling your cable TV package and going with digital television, or DTV, instead. You can easily access a bunch of TV stations as long as you have digital TVs set up in your home and ready to go.

So, what is DTV, and how does DTV work? Let's take a few minutes to learn a little bit more about it and what it has to offer.

Here are six DTV facts you need to know to take full advantage of the digital television revolution.

If you're going to welcome digital television into your home and start using it on a regular basis, you're going to need to begin by putting an antenna into place. An antenna will pick up DTV signals from local broadcasters and display them on your TV for you.

When most people think about antennas, they automatically think about the big, bulky metal contraptions that used to sit on top of homes and businesses many years ago. Today's antennas look a lot different and won't make it appear as though your home is capturing signals from outer space.

The key is finding an antenna installation company to hook your antenna up in the right way. They'll put it in the right place on either the inside or outside of your home and make sure that it's able to pick up DTV signals from wherever it's located.

Back when most people still relied on antennas to pick up signals for their TVs, they were only treated to a few select channels. It's why cable TV was so exciting when it first came around.

Today, those who decide to put DTV to the test are often pleasantly surprised by how many more channels they're able to get with an antenna. It's not uncommon for people to pick up dozens of channels at once, giving them plenty of things to watch on their TVs.

You can try to use DTV in just about any part of the country that you want. But generally speaking, those who live in larger cities are able to get the most channels from their digital television setups.

The reason for this is simple. Most of the places that are sending out broadcasting signals to those with DTV setups are located in larger cities. As a result, people who live in big cities don't have any trouble finding these signals and using them to watch TV.

That's not to say that those in smaller cities can't take advantage of DTV, too. But you might be a bit more limited in what you can watch when you set up digital television in a small city or town.

If you have TVs in your home that are capable of providing you with HDTV picture quality, you might be skeptical about using DTV. But you'll quickly find that a lot of the digital broadcasts that are out there are displayed in HDTV on TVs that can deliver high-definition pictures.

Most people are amazed to see how good their picture quality is when they have DTV set up in their homes. Many of the channels that you get will look just like they would if you were still signed up for cable TV.

The great picture quality won't be the only thing that you'll notice when you're watching TV thanks to DTV. You're also going to be shocked by good the sound quality is when your TV is turned on and broadcasting digital television.

One of the big complaints about analog TV used to be the awful sound quality that sometimes came along with it. With digital television, that's no longer an issue. You can watch the news, a game show, or a football game through DTV while enjoying high-quality sound the whole time.

As we mentioned earlier, cable TV packages aren't anywhere near as affordable as they used to be. It's why more than 50% of people who used to have cable have cut the cord and opted to move away from it.

Many of these people are now making do with streaming services like Netflix and Hulu. But they obviously cost money, too (albeit, not anywhere close to what cable costs!).

If you would rather not pay anything to watch a few TV channels each day, installing an antenna and utilizing DTV is going to be the way to go for you. You'll be able to save thousands of dollars each year in many cases while still providing your household with high-quality digital television.

Does Digital Television Sound Like a Good Option for You?

On average, people are still watching just as much TV as ever before these days despite the downfall of cable TV. Studies have shown that they watch almost 3 hours of TV each day.

You can continue to get your fill of TV without paying exorbitant prices for cable TV. You can do it by investing in an antenna and taking DTV out for a test drive. You'll wonder why you didn't give digital television a try so much sooner once you see how well that it works.

Would you like to read more about modern-day TVs and what they have to offer to you? Read all about them by checking out the articles on our blog.