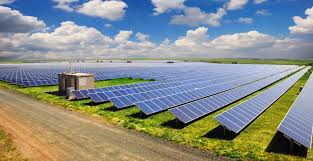 The power plant, which will be built on a former landfill, will be used to run the council's facilities at a "greatly reduced cost" in partnership with a licensed electricity third-party supplier to power. Sales to the grid are expected to bring a total net income of £12.8million over a 20-year period.

Senior policy manager Helen Melone said: “It will surprise many that the electricity generation potential of a solar PV array in Scotland is very similar to the rest of the UK – solar technology relies on daylight, not on sunlight, putting Scotland firmly on the map for using this cheap, green energy.

“North Ayrshire Council has taken the development of solar to another level with a commitment to ensure this scheme not only powers their own buildings but also provides an affordable electricity supply to reduce fuel poverty.

“Innovative schemes like this are to be commended and we look forward to seeing other local authorities follow this lead and utilise the full solar potential of the rooftops and land which they own.”

North Ayrshire Council leader Joe Cullinane said: “The climate emergency is an existential threat to our planet that requires urgent action to be taken, at all levels of government, across the globe to rapidly cut carbon emissions. Here in North Ayrshire we have a real chance to lead from the front and set the agenda.”