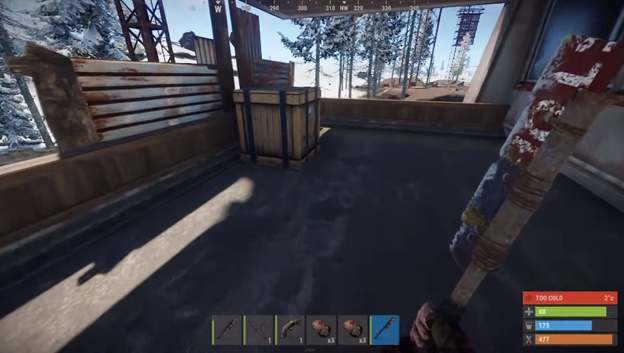 Today, Rust is arguably the most popular multiplayer survival video game. I personally love its beautiful scenery and its lack of a conventional way to play. Players decide on what the rules are. Despite its absence of non-existent rules, there are pro tips that can give beginners an edge over the competition before the survival of the fittest start.

Mastering these pro tips with rust hacks makes a huge difference during the match and once you have a good start, nothing can stop you. While playing Rust, you’ll die a lot and that’s okay. Also, don’t expect sympathy from fellow players, the fact is that in this game, no one is your friend.

As you begin or continue your adventure through the intimidating landscapes of Rust, here are 10 pro tips you need to know to better survive in the cruel world of Rust. Ready for the ride! You’re in the right place, just read on.

A friendly server isn’t crowded with competition. Sadly, most beginners chose a server that’s almost full of excitement. Unfortunately, that just makes the game lag and increases the chances of their death because of the presence of a high number of more experienced players on those servers.

Instead, start from point 0 and build your way up. This gives you a nicer playground as you experiment with pace and techniques. After settling and being more confident with your skills, move to more crowded servers and continue proving yourself in the competition.

We’ll all have our preferred hiding spots, but some are more common than others. In Rust, hiding your loot in the foundation of the base itself is key. You can also accompany this with optical illusions and camouflage.

A comfy place to lay your head is a safe place. If you need to get far in this game, this is an ASAP item that you ought to consider. Players will likely start by building and farming on the island which is not a bad thing.

I would advocate for farming Hemp Fibers since they’re very handy when it comes to making sleeping bags. Creating the sleeping bags will save you a lot of frustration when inevitably dying and re-spawning.

Hitting the correct spot is a unique thing in Rust. You have to learn it quickly for you to survive in this game. Simply hit the red X or sparkles immediately you spot them. This makes the gathering quicker and makes items drop more resources.

As they say, too much of everything is bad; it’s no exception in Rust. Once a player dies, they drop any belonging that was on them. So, considering that death is inevitable in this game, instead of endeavoring to gather as much as possible, consider going back and forth because death will not only be painful but also very frustrating. Set a goal for only the necessary amounts of resources.

Like other survival games, in Rust, you usually hear your opponents before seeing them. Listen keenly for animals, enemies, and zombies. Being aware of their presence matters a lot in your Rust experience. Different animals will have varied footstep sounds and so being aware of that distinction gives you an edge over other players on your server.

In Rust, open doors allow for less damage than closed ones. A strategically located open door provides better blockage than closed doors with a combination lock. You may use open doors as walls that provide an extra barrier from your enemies.

Cooking is probably the most relaxing task when playing Rust, but you have to be careful about its timing. Starting a fire to cook during the night is like a flare gun that lets your enemies know about your location and launch an attack. So, be cautious about timings of fire lighting and instead check and assure you have enough food before darkness falls.

To keep your dream of becoming a pro Rust player, YouTube videos might prove handy in providing timely updates for the game. Watch them and thank me later.

You can shun attackers by upgrading your base. For instance, tiers of stone walls are harder to raid than wooden barriers. Even though such upgrades may be expensive in the beginning, they’ll prove handy in the long run in offering extra protection for you and your loot.

Becoming a pro Rust player calls for dedication, effort, and lots of patience. That coupled with knowledge of these rust hacks are assured to accrue you your desired success in this game of survival.