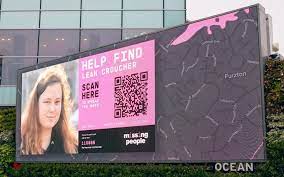 Advanced AI technology is being used in London to make posters of missing children more attention-grabbing.

The Missing People charity is using advanced AI technology to convert standard photos of missing persons into 3D images, which are posted on billboards across London. The goal is to attract more attention and create awareness as well as engage passers-by to report sightings.

From Wednesday, the posters were shown at Canary Wharf and two Westfield shopping centres in White City and Stratford. They include a QR code to encourage passers-by to tap into social media and spread the word among their networks.

Every year, around 70,000 children and young people are reported missing in the United Kingdom. 16-year-old Alexander Sloley, who vanished from Islington, is one of the first to be featured on the billboard. 19-year-old Leah Croucher, who has not been seen since 2017, is another.

Claire Croucher, Leah’s mother, said: “Seeing Leah’s face move and smile on these amazing new posters is wonderful and gives us renewed hope that Leah – and other missing people like her – will be reunited with their families.”

Jo Youle, chief executive of Missing People, said: “When it is appropriate to publicise someone’s disappearance, our appeals are a hugely important way to reach the public, to help find children.

“By embracing innovation, we hope the new appeals will have an even greater impact and lead to those featured being found safely.”