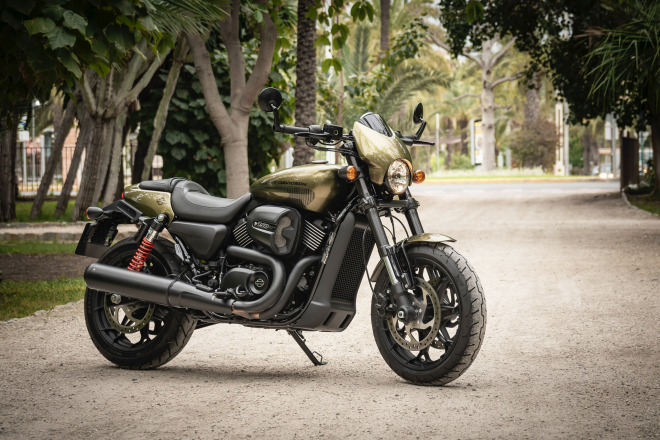 Buying your first hog means making a decision - which brand is right for me?

Most bikers agrees there's no other way to hit the road than on a Harley Davidson. Many would prefer to buy a used Harley over a new bike from another manufacturer. Known as part of popular American culture, discover ten reasons to buy a Harley Davidson when you're ready to get a bike.

There was a time when it mattered whether items were made in the United States. For years, imported goods became popular because they cost less. When toxins and other problems arose, people once again started to watch out for where products are manufactured. Finding items made in the U.S. is again a common goal for many consumers. Bikers look no further than Harley Davidson to find motorcycles that are born in the U.S.A., just like a lot of the people who are interested in a bike.

Unlike other manufacturers, Harley will rebuild the engine to OEM specifications to ensure it runs right. Instead of trying to do it yourself or get someone who knows how, Harley owners turn to the manufacturer to do the job. A rebuilt engine operates much like the original, offering the amazing power and reliability that Harley drivers have grown to love. Plus, a factory rebuilt engine is an investment tin the bike to keep it running for years to come, and increase its potential resale value.

Get Anything for the Bike

When you own a Harley, you can get anything you want to accessorize the bike and yourself. The world of Harley merchandise is limited only by your imagination. There are a variety of seats, wheels, covers, helmets, key chains, and other items created to perfectly complement the Harley. Plus, the apparel is part of owning a bike as beautiful as a Harley. Wearing a hat, t-shirt, and other items to match the bike creates the whole look you always wanted when you dreamed of owning one.

Join a Class of Bikers

Once you get the gear for the bike and yourself, you are ready to join a world glass group of bikers. When you drive a Harley, everyone recognizes the bike and admires it. From people who always wanted to own one to Harley owners with four bikes in their garages, there will be a class of people who instantly talk about the bike. One of the easiest ways to start a conversation in a group is to pull up on a purring Harley.

Hang Out at the Dealerships

Harley Davidson dealerships are known as some of the friendliest places on the planet. Whether you arrive riding on a Harley or you can't wait to buy one, the dealership is the perfect place to hang out. Kick back, grab a cup of the famous coffee, and get ready to have a great time talking about the best bikes in the world. Everyone is ready to share their tales and suggestions to improve the Harley experience. From how and where to ride to what to wear, get ready to hear everything you every wanted to know and more about being a Harley Davidson owner. Often people wind up buying another bike while they are at the dealership!

Owning a bike made by an unknown manufacturer means dealing with problems on the road and nobody knows how to fix them. As the most popular bike in the country, there are plenty of mechanics who know how to work on Harleys. Make sure to take your bike to a mechanic who is specially trained to work on these incredible motorcycles. Talk to the mechanic and find out how much they know about fixing and maintaining Harleys. Discuss mechanics with other bikers to find out their experiences and choose one who is reputable. Remember to put your bike in the hands of a pro to keep it running smoothly at all times.

Often referred to as hogs, there is a good reason for the term. The Harley Owners Group (HOG) is a dedicated group who loves to own and ride these irresistible bikes. When you get a Harley, you can become part of this exclusive group. Attend events, talk about riding, and take advantage of the friendships and knowledge that come with buying a Harley Davidson.

On the Road Again

One of the biggest reasons anyone buys a Harley is to hit the road. The lure of the road reaches out to bikers and makes them want the freedom to feel the wind in their hair and against their backs. Getting onto the bike is the first step toward leaving the hassles of daily life behind. When you buy a Harley, all the possibilities of the open road are there for you to take. Go on the road alone for a while or ask your friends to come along. Become part of a local group of riders who ride for reasons such as charity or fun. No matter how you like to do it, there are countless ways to get on the road and have a good time on a Harley.

Anyone who has been on a Harley instantly recognizes the difference. The power of this incredible bike make it the topic of movies and conversations for generations. The most renowned bikers have rode up to the scene on a Harley, and for good reason. The durable design, gorgeous lines, and powerful engine make it one of the most coveted bikes on the globe. Riders want to feel the power and know they can handle any terrain ahead as they face the road to freedom, fun, and possibilities.

With these ten reasons in mind, it's easy to see why you can't wait to own a Harley. Feel reassured knowing you are making a solid investment in freedom and fun for today and the future. Harleys retain their value as enthusiasts are often eager to keep several in their garages for different days and moods.