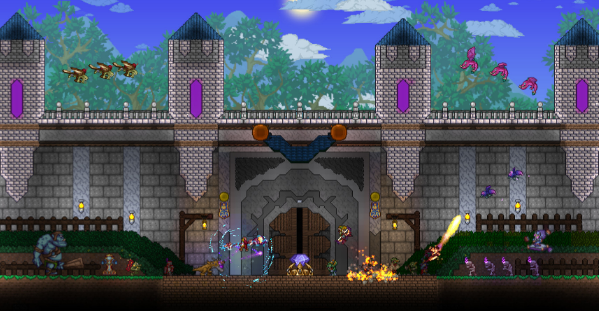 Terraria is a 2D side scrolling game that was initially released in 2011.

the game focuses on collecting, building and combat as many compare it to the giant of Minecraft but with some differences. It has been around on a number of platforms for some period of time - initially on the PC where it found success through Steam sales providing an extremely cheap way to get into the game but also recently on mobile - whilst many still play their favourite puzzle brainteaser and casinos not on gamstop, Terraria has been rising through the ranks to become well known across all platforms - and recently the game released its final update, Journey’s End, with a whole host of changes.

The update has brought a lot of quality of life changes - the character creation and customisation screen has been modernised and made much simpler to use whilst also adding a number of options to enhance the experience, as well as two new difficulty modes in Journey and Master mode - the former effectively being what Creative mode is within Minecraft, and Master mode being another step on top of the previous Expert mode. In game mechanics such as NPC happiness removes the old prisons that were made to save space and stack the NPC’s on top of each other, as well as providing benefits in the way of pylons which help you teleport around the map for doing so. The update also brings a huge library of new items - over 800 of them - as well as other fun mechanics such as golf, a new weather system, new mini biomes, new backgrounds, and new music.

The update dropped on May 16th - and it was of course free as all prior updates - and has widely been received extremely well - many streamers and YouTube content creators have had their fill posting daily videos since the patch showing off all of the new content and exciting fans with the huge amount that has been added, but with all the good must always come a little bad.

The team behind the game have stated this update has been a labour of love for them - it’s clear to see why with so much being added to the game as just in items alone there is a 120% increase. This is, however, the very last update the game will receive as the team move on to new projects bringing the end to a game that has been taken care of for almost a decade - that isn’t to say it will disappear, with all the new content there’s plenty to keep players going for a long while yet, but the game also has huge modding support bringing new enemies, bosses, items, challenges, and everything else include - the modding community will keep the game alive long after the support finally does end from the developers, but with this patch being the final hurrah, it seems they have certainly done a very good job at delivering a huge wealth of content to the fans.