The 6 Best Comic Book Sites to Find Your Favorite Series 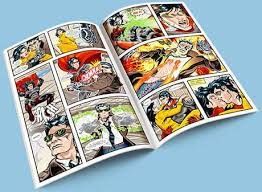 Unable to find the best comics you want to read? Explore how Comixology, The Internet Archive, and Marvel.com are your best bets to find them.

Comic book culture has been a big part of everyone’s lives, not just Millennials and Gen Z. DC Comics, for example, is almost 87 years old. That’s a major part of the last century, as well as all of this one. Comic books were a big part of the print media industry, long before the internet came around. However, unlike many other forms of print, comic books proved a natural fit for digital formats as well.

More and more markets are gaining access to things like affordable Spectrum internet prices, thanks to beefed-up infrastructures and reach. So, if you’re looking for comic books online, don’t worry. You’re not the only one! Read on to find out the best websites to find and download comics you can’t find at your local store.

Comic books form a huge part of many people’s childhood. They help stimulate budding ideas on morals and actions. And there are even comic books geared towards more mature audiences. Far from being a meaningless way to kill time, the comic book industry has grown over the decades. Some of cinema’s most iconic franchises such as Batman, Superman, Wonder Woman, and Black Widow are all based on the DC or Marvel comic book originals. The MCU has seen unprecedented success with ensemble casts on The Avengers, while the DC cinematic universe gave us the dark and gritty Justice League.

It would be safe to say that many people are or can become comic book fans. And consuming comic book content is a great way to acquaint yourself with deeper backstories and origins. But the thing is, all of this is proprietary content. Comic book companies have invested heavily over the years in their characters and storylines. Which makes it both unfair and criminal to infringe their licensed right to profits. All of the websites below distribute licensed comic book content compatible with most formats. See which works best for you:

Free and Premium Comics at DriveThruComics

DriveThruComics offers an interesting mix of old and new comics. It also has options that are free to read, as well as more premium ones that you need to pay for. Depending on the comic you need, it could cost you as little as $0.99 to as much as $40. The site offers access to both new and recent titles as well as older series from a few decades ago. Moreover, the website includes tools to help you refine your searches for specific comics. And the smooth and intuitive interface makes it even easier to satisfy your comic book appetite.

All Your Favorites Plus Amazon’s Graphic Originals at Comixology

Comixology is not your average comic book website. It is part of the larger Amazon umbrella. As everyone knows, Amazon originally started out as an online bookstore, before branching out into e-commerce. Along with becoming the largest e-commerce company in the world, Amazon also ventured into different verticals, including its Prime Video streaming service.

Comixology is one of the best websites to visit for digital comics. The sheer range of titles isn’t restricted to just Marvel or DC. It includes graphic novels from recent shows like Stranger Things, Three Hundred, Preacher, and The Boys. All you have to do is find the comics you need, buy them, and download them to read at your pleasure.

Straight from The Publisher at Marvel.com/comics

Marvel is one of the best-known names in both comic books and in Hollywood. The comic book publisher, thanks to the creativity from pioneers like Stan Lee, grew from a small-time business to one of the largest names in the entertainment business. Marvel owns rights to some of the most iconic superheroes, including Thor, Spiderman, the X-Men, Avengers, the Hulk, and even Ironman. Of course, the official Marvel website is the best place to find any Marvel comic book you could think of. Moreover, since Disney acquired it along with LucasFilm, you can even find comics relating to Star Wars and the extended Disney universe.

Find Older Issues to Reread on the Internet Archive

The Internet Archive is not really a comic book site. Instead, it is run by an institution of digital historians focused on how the internet evolved over the ages. Many older comic books may no longer be available online. But the Internet Archive crawls and preserves the web periodically. So, if you choose the right year parameters, you should be able to locate some of these lost publications. However, you probably won’t be able to download or read them. This may be because the website that published them all those years ago could be defunct now. Still, it’s worth a shot to re-live some of the nostalgia from your childhood and what comics looked like back then.