The BMW iX - A Review 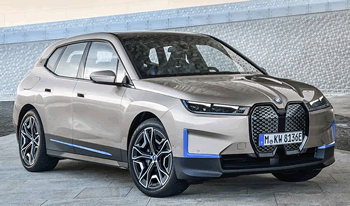 The BMW iX is the most recent electric UV released by the German vehicle manufacturers.

It’s been nearly a decade since BMW introduced their sub-brand known as BMW i back in 2011. The move helped to reshape the brand with a strong dedication towards renewable power and brought about models such as the hybrid i8 and the all-electric BMW i3.

Since then, the i8’s production has ceased as of April and the i3 is no longer BMW’s priority with the Mini Electric replacing it in March. This has left a window for a new model which the iX is set to fill as BMW’s flagship electric vehicle.

How the BMW iX Stacks Up

The iNEXT is being treated as a production model that will be available to purchase in 2021. This SUV will use a four-wheel-drive and is going to be between the X3 and X5 in terms of size. By contrast, the BMW iX will be a similar length and width to the BMW X5 and roughly the same height as the BMW X6.

The iX will feature the fifth-generation eDrive and will have two motors with a max output of 500hp. This will allow the BMW iX to from 0 to 62mph in less than five seconds.

The power efficiency for the iX is 21kWh per 100 km according to test cycle results. It also has DC fast-charging of a value of 200kW, giving in excess of 75 miles of added range in a ten minute period. The battery can go from 10% to 80% in less than 40 minutes and will take about 11 hours to fully charge from 0% at 11kW using a Wallbox.

The architecture used is completely new and specially designed just for the iX. The body structure of the iX includes an aluminium spaceframe and a carbon cage, giving it a high degree of torsional stiffness. This makes the car easier to handle, keeps weight down, and adds much-needed protection. Their emphasis on recycled materials echoes many of the ideas from the i3 model. Also, the battery and the power used to make the battery cells come from renewable energy sources.

The BMW iX features an improved onboard computing system that can process 20x the data capacity of previous models. This allows the car to handle large amounts of processing and means the best UK casinos can be accessed from your car. If you’re looking for some downtime whilst on the road and waiting at a service station, some online casino games may do the trick.

The new model is obviously not fully self-driving but there is an improvement in the parking functionality of the vehicle. This means that this model will be level-3 autonomous capable.

Cooling grilles aren’t staples of electric vehicles but BMW have persisted with the design here. They are a distinct feature of the car but are now blanked off. The BMW iX has house cameras, a radar, and other sensory equipment installed behind the transparent surface.

As well as the previously mentioned design elements, the new BMW model has slim headlights, fitted door openers, side windows without frames, and a tailgate that gits across the rear without separation joints. There is a panoramic glass roof on the inside of the car that covers all of the seating areas. No centre tunnel is included and the BMW iX only shows displays when necessary.