The Development of Virtual Reality: From Science Fiction to the Metaverse 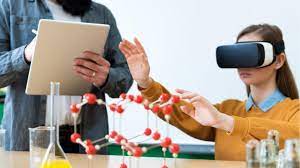 Virtual reality (VR) has been around for longer than you probably think it has.

There is some debate over when the idea of VR was first suggested. Some people suggest that it was Sir Charles Wheatstone who first pioneered the concept with the stereoscope that he created way back in the 1830s. However, virtual reality also appeared in science fiction stories, in different forms, before Morton Heilig’s Sensorama, which stimulated several of the user’s senses while they watched a 3D movie.

Numerous inventors have created different ways of trying to provide a VR experience since then, with many attempts at headsets or glasses that transported the wearer to a different setting. NASA astronauts were among the first people to use a functional VR machine, while SEGA and Nintendo tried to introduce a gaming headset.

It was arguably the launch of the Oculus Rift headset that brought VR back into the spotlight, with their successful Kickstarter campaign getting people excited about the subject again before Facebook bought the company for $2 billion. This led to a string of similar headsets being developed and marketed.

Who's Investing in the Future of VR?

More recently, Mark Zuckerberg has been keen to position his company as the leader in the race to design the Metaverse, even changing the name of Facebook to Meta as part of the plan to turn the page and convert it into a Metaverse-oriented business. Tellingly, this company is said to have invested up to $10 billion in the Metaverse, so far.

Sony, Google, Meta and Samsung are among the major companies that have invested heavily in VR in the last few years, as they look for different ways to stay ahead of the pack and create the next big thing, but as yet there isn’t a clear leader or winner in this industry.

AMC Entertainment Holdings Inc gives us another example of a major company pouring money into VR. They invested $20 million into virtual reality arcades and productions through their funding of Dreamscape Immersive. A look at the AMC share price UK history suggested that the move hasn’t yet increased their market value. This is a way of attempting to renovate and modernise a traditional business that has been around since 1920, and that others are sure to attempt.

Among more recent news stories, the Chinese firm, Forking VR, revealed that its pre-A round of funding had raised “tens of millions of yuan”, with the Sequoia China Seed Fund their main backer at this stage. They’ll be using the money to develop their products and increase the numbers in their technical team.

Another interesting story involves FundamentalVR, which raised $20 million in their Series B funding round, as they look to expand their VR surgical training platform. This example also helps to show another of the possible real-life uses for this technology that should ensure that the market carries on growing and evolving.

Virtual reality has come a long way since those early ideas that must have seemed like science fiction at the time. We can now see exactly what VR can do, and that helps to explain why so many firms are keen to invest huge sums of money in this technology of the future.