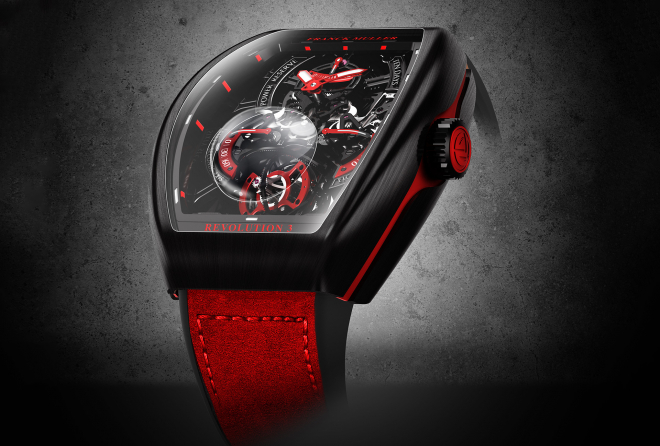 The word “competitive” could be considered an understatement if you want to describe what the luxury watch industry is like.

What (and Who) is Franck Muller?

Before we delve into the story of the bankruptcy of Franck Muller that only lasted around a week, we must first get to know what Franck Muller is as a brand and what makes it stand out compared to other luxury watch brands. Franck Muller is a watch brand named after its founder and former CEO, Franck Muller. He was born in 1958 to a Swiss father and an Italian mother. His passion for watchmaking became apparent when he enrolled in a watchmaking school at 15 and when he graduated from the famous Watchmaking School of Geneva in the 1980s. He developed a passion for the mechanisms of watches while handling collections of Patek Philippe watches, and this made him think about building his own watch company.

But this would not happen until he met someone named Vartan Sirmakes, who urged him to create his own luxury watch brand in 1991. Before that, Franck has already been making watches with unique designs and complex complications, including a tourbillon wristwatch. Yet as demand for these watches grew, Franck realized the need to expand his business and create a company that would cater to the needs of his growing clientele. Since its founding, Franck Muller has developed “World Premiers,” which are watches that have outstanding designs and complicated mechanisms. His watches are also famous for having a fusion of traditional Swiss and modern styles inspired by American watches in the 1930s.

Many of his watches have features such as a perpetual calendar, minute repeaters, split-seconds chronograph, and even an internal temperature indicator. Franck Muller’s most famous timepieces include the Endurance and the Master Banker. Many of Franck Muller’s watches have been worn by personalities such as Cristiano Ronaldo, Paris Hilton, and Kim Kardashian.

The Story Behind the Bankruptcy

Once a business goes bankrupt, it usually stays that way for good. It is rare if not impossible for businesses to make a comeback after hitting rock bottom, and some bankruptcies are spectacular because they cause economies to crash. But this is not the case with Franck Muller, and the story of the watch brand’s bankruptcy is often described as bizarre and even ridiculous. Franck Muller’s bankruptcy first appeared in an issue of a French-language Swiss newspaper Le Temps on May 10, 2017, and it has been reported on other websites since. But while this story has been reported a few times, it’s just too interesting to be retold all over again.

The issue began around April 24, 2017, when a Swiss court ruled out that Franck Muller was declared in default. Because of this, many journalists and writers became interested in the story and sought to know what was happening in the luxury watch brand. Contrary to the rumors that the company and its owner were facing financial difficulties, the reason behind Franck Muller’s default was just because of a contested invoice of about 57.70 CHF or around 64 USD from APG/SGA, an advertising and billboards company. Franck Muller disputed the invoice, which was for an advertising campaign that the watch company wants to launch in Geneva airport. Because of this dispute, a court ruled that Franck Muller was defaulting and therefore going bankrupt. But this decision was later junked after eight days by the Civilian Chamber because of the low cost of the invoice (including the fees and the payment). Nicholas Rudaz, the Director of Franck Muller, later said that the company’s ridiculous story of bankruptcy has been settled and there is no need to worry about the company or its owner.

If we compare Franck Muller to other more established watch companies such as Rolex and Patek Philippe, this company is relatively young. Therefore, it would seem that Franck Muller would not be able to match other luxury watch brands in the industry. But this is not certainly the case. Since the company was founded around 30 years ago, Franck Muller has been creating watches with awe-inspiring designs and uncommon features that would shock the watchmaking industry.

As a watchmaker, Franck Muller has been noted for his creativity and craftsmanship, and he has been called the “Master of Complications,” a title that perfectly describes not just him but his company as well. One watch model that shows Franck Muller’s predisposition towards the avant-garde and the unique is the Crazy Hours, which was launched in 2013. Unlike most luxury watch models, the Crazy Hours featured numerals that seemed to be in complete disarray. But even if this is the case, this watch can keep time accurately and perfectly thanks to its innovative jumping hour mechanism. Franck Muller’s watches also range from around 11,000 to 23,000 USD, a price range that is definitely for luxury watch brands and not for cheap. Franck Muller has also developed a reputation for creating watches that have a unique shape, notably the Cintree Curvex design. This design features an odd rectangular but curved shape. The Cintree Curvex design has made Franck Muller watches stand out from the rest of the competition. With unique designs, relatively high price points, and innovative features, Franck Muller surely deserves to be considered a luxury watch brand and it should never be underestimated, despite its relatively young age as a luxury watchmaking company.