The Most Amazing Young Strikers of 2020

When it comes to football, we love to watch the incredible performance of the best players on the pitch.

It’s always exciting to see the development of young players over the years. And as a real football fan, everyone would love to see the journey of their favourite player becoming one of the best footballers. Let’s take a look at the best young strikers of 2020 and learn why they are in the list.

There have been many great players produced by the Ligue 1. At the moment, the league is having a few young talents, including Rayan Cherki. At the age of 16, he became the youngest player to score for Lyon. Last season, he scored 3 goals and provided a couple of successful assists in a few appearances with the first team.

Cherki’s playing style is fun to watch as he can easily run past defenders. More importantly, he is able to do everything with both feet which is one of his best advantages. Not only is he good at scoring, but also providing assists. If you watched the Coupe de France game between Nantes and Lyon last season, you would have seen how amazing Cherki was as he scored 2 goals and assisted 2 other goals. That’s why he is in the list of the most amazing young strikes of 2020.

The future of Cherki at Lyon is still questionable due to the effect of the pandemic. It’s not a surprise when the club still wants to keep him. However, if they are having financial issues, it will be a good idea to give the young player an opportunity to play for the top football clubs. 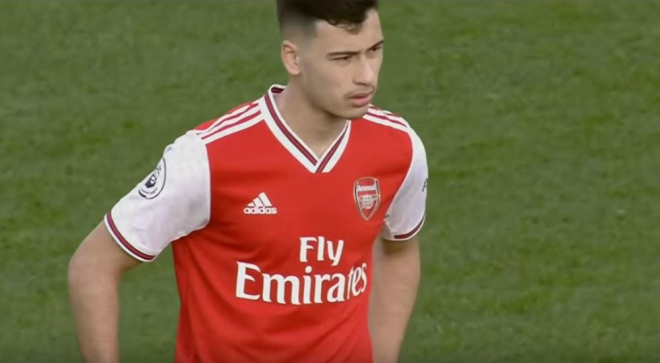 When Gabriel Martinelli first moved to Arsenal in 2019 as a teenager, people still doubted what was special about him. But the Brazilian player did not let the club down when having double figure goals in his first season. Apart from Nicholas Anelka, there hadn’t been anyone else who could do the same thing at that young age. As no one expected to see such an amazing performance from Martinelli, he had a good surprise to everyone.

He scored in his first game against Nottingham Forest, scored again in the second one, as well as produced an assist. He continued to score in the games against Chelsea and West Ham. Unfortunately, he had a knee injury in July and had to end his season early. At the time, he was already a key player so it was a big loss for Arsenal.

Given the fact that he is just 18 years old, he still has plenty of time to recover and continue to shine on the pitch with his speed, technique, as well as finishing ability. He is undoubtedly one of the best young strikers of 2020.

The young Dutch talent Joshua Zirkzee who is 19 years old is another name in this list. He is one of the best young forwards as he managed to score 4 goals in 9 appearances for Bayern. Considering he was mostly used as a substitute, that was an impressive achievement.

Zirkzee can be an incredible center forward, which shows how confident he is as a young striker. Whenever he has the ball, he has a good command on it. In addition, he quickly sees his opportunities and he will make the most of them. He is an amazing goal scorer as he can use his feet and head to score.

Although he can’t replace Lewandowski right now to be in his position, it is obvious that playing the same position for the same team helps Zirkzee learn a lot from the best striker in the world. Besides, at the age of 33, Lewandowski might not have many more great years in his career. So Zirkzee can always hope to get a position in the first team if he continues to develop his skills.

Bayern Munich is a club that has always been demanding about their forwards. That puts young players like Zirkzee under a lot of pressure to perform well. He has already made a good start, so football fans can expect more of him as one of the best young strikers of 2020.

Moise Kean is a young, quick, and strong center forward. At a very young age of 17 and in his first season with Juventus, the Italian player scored in the Serie A and won the domestic Double with the club. He continued to score as he was playing for Hellas Verona for more experience, then he returned to the Champions.

In the 2018-19 season, Kean had some important goals for his club and the national team and caught the huge attention. In his 13 appearances in Serie A, he scored 6 goals for Juve. Not to mention, he also became the youngest Italian player to score for the nation team.

Although Kean had such a great potential and promising future, Juve still sold him to Everton due to his attitude with a transfer fee of €27.5m in 2019. At Everton, Kean hasn’t been performing really well. A part of the reason might be because of his antics off the pitch.

Since Carlo Ancelotti arrived, Kean seems to have more chances but he still needs to be patient. If he keeps working hard this season and improves his skills, he can show his fans why he is one of the most amazing young strikers of 2020.

Greenwood holds a position in this list as he was the youngest player to score in European competitions in the 2018-2019 season. A year later, he made a name for himself as he was continuously a part of the first team.

In his 49 appearances for Man United, Greenwood scored 17 goals. Remember, he is just 19 years old. That’s why he got to wear the legendary No. 11 jersey that Ryan Giggs wore. Of course, he is expected to become a great player as Giggs did.

He is left-footed, but he can play with his right foot quite well. Apart from his speed, strength and shooting ability, he is also able to dribble past defenders. That’s why you see him play well on the wings and in the center forward position.

Having such talent at a young age, we will see what Greenwood can do for Manchester United and England in the next few years.

Above is a share of a few excellent young strikers of 2020. Is this list missing anyone worthy? Please leave your name below. Other relevant information such as football news, schedule, bang xep hang, results please see the website live football Ibongda.