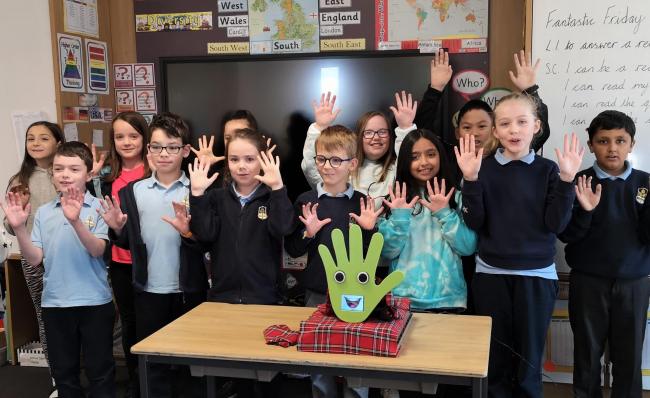 Two Glasgow schools use a social robot to boost hand-washing awareness among pupils.

Two Glasgow schools are using a high-tech robot to help fight the spread of Covid-19 among their pupils.

Wallbo, a social robot, aims to increase handwashing compliance and improve knowledge about hand hygiene. The robot, which is currently being trialed at St Bride's and Broomhill primary schools, is the brainchild of Glasgow University researchers, who are currently refining the technology to make it autonomous.

Lead developer Dr Amol Deshmukh, from the university’s Institute of Neuroscience and Psychology, said: “Our observation is that the children like the features on WallBo.

“[It] looks like a hand and it also has moving eyes, which enhances the overall ‘being watched’ effect.

“Also, the voice of WallBo is a childlike voice, so it basically creates this connection with children.

“During the trials in the two Glasgow schools, we teleoperated the robot as a proof of concept, so there was a human observer who was watching the handwashing steps and teleoperating the instruction provided by WallBo to the children,” he added.

“But we have a lot of data that we have collected from the trial and which is helping us to build the artificial intelligence system, especially looking at computer vision and machine learning, so WallBo can automatically detect those steps and prompt the desired response from the children.