Your Guide to the Best Day Trips from Florence 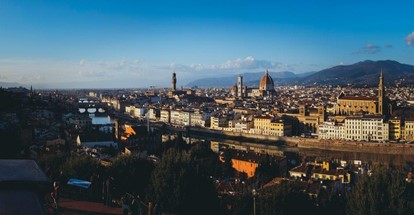 Florence, also known locally as Firenze, is a city located in central Italy and is the capital of the country’s Tuscany region.

Additionally, Florence is a popular tourist destination not just in Europe but also in the world, welcoming millions of tourists every year. The Italian city of Florence is renowned for its historic, artistic, and architectural heritage. In fact, Forbes named it one of the world’s most beautiful cities.

While Florence is already a top destination in itself, there are a number of other prominent places not too far from the city that are worth exploring if you have the time. With its location in the heart of Italy, Florence is a great home base for discovering the rest of the Tuscany region as well as neighboring towns and cities. Here are some of our top picks for best day trips from Florence. (Pro tip: To avoid having to carry unnecessary items, look for a luggage storage service in the city and deposit your excess baggage there.)

One of the most popular day trips from Florence is the small but charming city of Siena. Situated about 45 miles south of Florence, Siena once flourished in wealth and power. Similar to Florence, this tiny city is a treasure trove of art and architecture; Siena has some of the most magnificent Gothic-style buildings in Italy.

Some of the highlights found in the city include the Piazza del Capo and Palazzo Pubblico, an 800-year-old city hall that features some incredible 14th-century frescoes. But the city’s crown jewel has to be Duomo di Siena (Siena Cathedral), which houses a museum containing works by famed artists like Bernini, Giovanni Pisano, Donatello, and Lorenzo Ghiberti, to name a few.

Easily accessible from Florence via the Santa Maria Novella train station is the small but historic city of Pisa. A two-hour train ride will bring you to this well-beloved city, which is best known for the iconic Torre Pendente, more commonly known as the Leaning Tower of Pisa. 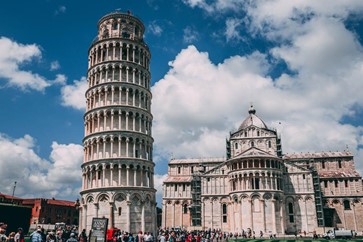 Once designated as one of the Seven Wonders of the World, the bell tower stands 55 meters tall and is leaning at an odd angle and was considered an “architectural blunder”. Today, however, it still stands tall and is among Italy’s most recognizable landmarks. Note that only a limited number of people are allowed inside; book a ticket in advance here.

Cinque Terre (which means “five lands” in English) might not be located within the Tuscany region but it has become one of the most popular day trips from Florence and it’s easy to see why. Found within the province of La Spezia, the coastal city is made up of five villages – Corniglia, Manarola, Monterosso al Mare, Riomaggiore, and Vernazza – thus its name.

The area is characterized by colorful houses and terraced gardens and draws an average of 2.5 million visitors annually. Because of its rich culture as well as a natural and architectural beauty, Cinque Terre was designated as a UNESCO World Heritage Site.

Although Bologna is approximately 57 miles outside of Florence, the efficient transportation system makes it easily accessible from the city center via a 30-minute train ride; this makes it one of the top day trip destinations from Florence. The city of Bologna is renowned for its excellent food; after all, it is the region that brought the likes of Parmesan cheese, prosciutto ham, and balsamic vinegar. Apart from that, the city also originated Italian classics such as the lasagna, tagliatelle alla Bolognese, and the mortadella ham. Bologna also has some beautiful architecture, such as their leaning brick towers that are reminiscent of the famous Leaning Tower of Pisa. Other Bologna highlights include the Basilica of San Petronius, Piazza Maggiore, and Santo Stefano.

Looking for a place that’s straight out of a postcard? If so, you should definitely take a day to see Val d’Orcia, which is undoubtedly one of the world’s most picturesque countrysides. In fact, it is so stunning that it was listed among UNESCO’s World Heritage Landscapes and is a popular tourist destination from Florence. More than the incredible scenery, Val d’Orcia is also renowned for the exquisite food and wine. The Pecorino Romano cheese is made only in this part of Italy.

However, public transport isn’t advisable when visiting Val d’Orcia as it has no train stations. Instead, the best way to explore the city is to rent a car and take a two-hour drive or to book a day tour from Florence (check out some of the top day tours here).

Lucca is a tiny city that isn’t frequented as much as nearby cities like Pisa and Siena, which is exactly why you should pay a visit! The city has plenty to offer – from Roman architecture and medieval churches to their Renaissance landmarks and piazzas. One of the noteworthy spots here is the Piazza dell’Anfiteatro; this oval-shaped public square features houses that are built into the walls of a Roman amphitheater. Other cool sights include the Palazzo Guinigi, San Michele in Foro, and the Duomo of San Martino.

Nestled between Florence and Siena is one of the prettiest villages you’ll ever see in the Tuscany region – San Gimignano. Just an hour away from Florence, the city is teeming with vineyards, hills, and olive groves; looking like it’s taken straight out of a postcard. The city is also known for its well-preserved medieval buildings, including 14 from the original 72 towers that date back to the Middle Ages.

While this city is a little off-the-beaten-path, Arezzo is definitely one worth taking a day trip to when you’re in Florence. This wealthy city holds numerous traditions, including a long history of goldsmithery that goes on to this day. Arezzo is also known as the birthplace of prominent artists Piero della Francesca and Giorgio Vasari, which means you can expect to see a number of their works all over town. If you’re lucky enough to be in town during the first weekend of the month, you can enjoy the fun Arezzo Antique Fair to get a glimpse of the authentic local life.