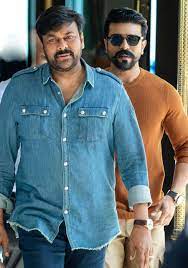 Today, let’s talk about the South Movies industry and its popular actors with famous fathers.

Most children are expected to take their family’s legacy forward and maybe even take it to new heights. The film industry is no different. It has actors, directors, producers basically everyone, wanting their children to succeed in the industry.

Today, let’s talk about the South Movies industry and its popular actors with famous fathers.

Megastar Chiranjeevi, even today, has millions of fans that admire him. And his son Ram Charan is no different. The RRR actor has stepped into his father’s shoes while earning quite a large fanbase for himself, all on the basis of his talent alone.

One of the most good looking father-son duos on the list is that of Mammootty and Dulquer. Mammootty has worked in over 400 films and still continues to do so. Meanwhile, Dulquer came in with all his talent and charm and quickly won over the audience’s hearts.

Another dashing father-son due on the list who are working neck to neck in the industry are Nagarjuna and Naga Chaitanya. Their latest release Bangarraju saw Nagarjuna sharing the screen with both his sons, Naga Chaitanya as well as Akhil Akkineni.

Known as 'The Complete Actor', Mohanlal is a tremendously popular actor in the Malayalam film industry. His son Pranav Mohanlal, who has worked in films as a child, made his debut as an adult in the 2018 release Aadhi and has been going strong ever since.

Kasthuri Raja is an Indian film director who has helmed several Tamil movies including his son, Dhanush’s debut film. Kasthuri Raja also worked as an actor and lyricist in a few films. Meanwhile, Danush is an actor, producer, director, lyricist and playback singer who predominantly works in Tamil cinema.

Jayaram has worked in over 200 Malayalam films. Meanwhile, his son, Kalidas, who works in both Malayam and Tamil films rose to film with a recent release titled, Oru Pakka Kathai.

S.A. Chandrasekhar is another director who launched his own son, Vijay aka Thalapathy in one of his directorial ventures, Naalaiya Theerpu. And ever since then, Vijay has just taken the family name forward with his exceptional work in films like Mersal, Master and others.

Nandamuri Harikrishna is an Indian film actor and politician, who is also the father of popular Telugu actor Jr. NTR. The RRR actor has the love for cinema running in his genes with his grandfather NTR being one of the most popular Telugu actors ever.

Late Malayalam superstar Sukumaran was rightly blessed with 2 extremely talented sons Indrajith and Prithviraj to take his legacy forward. While Indrajit is doing great acting in films, Prithviraj has also ventured into direction and production. Prithviraj was last seen in Jana Gana Mana, which was a raging success among the audience.

Allu Aravind is an Indian film producer and distributor of Tollywood. Meanwhile, Allu Arjun is enthralling the audience with his films such as his recent release, Pushpa: The Rise.