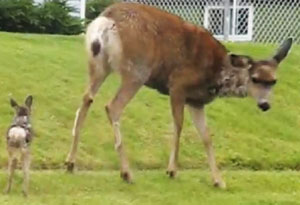 Experts are saying that in order to care for the UKâ€™s woodland and wildlife, deer numbers will have to be reduced

The number of deer existing in the UK has caused some worry for researchers. A new study, which is published in the Journal of Wildlife Management, claims that because of the amount of deer, Britain’s woodland and wildlife is suffering.

There are calls from scientists for deer culling to be carried out in order to reduce deer numbers, so that the damage caused to woodland, and the effect this has on wildlife, can be lessened.

The study suggests that around 50per cent of wild deer should be killed in order to strike a balance with the deer population.

However, it is not clear how many deer currently reside in Britain, as the country’s deer numbers will be measured for the first time. It is believed by experts though that there are now more deer than ever before, supposedly reaching as far back as around 10,000 years ago.

An ecologist from the University of East Anglia, Paul Dolman, told The Independent that the numbers are unknown simply because deer have not been counted.

He said: “Deer numbers are increasing because there is no check on them. Deer populations are going through the roof – there is an explosion in numbers.”

One reason for this could be because there has been a change brought about by the modern world, in the sense that there are fewer predators to feed on the deer. Also, perhaps because of today’s situation concerning the matter of hunting, this may also be a reason why deer numbers have apparently flourished.

There are two main types of deer that are originally from the UK, known as the red deer and the roe deer.