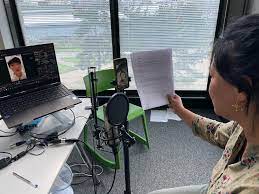 Wang Rousang teams up with Leeds Industrial Museum for a digital performance about two cultures coming together.

Wang Rousang, one of China's top opera stars, has teamed up with Leeds Industrial Museum to create a digital performance using the latest motion capture technology.

The opera star with the famed Shanghai Yue Opera House has created a virtual reality character that visitors can engage with throughout the mill spaces and galleries. Entitled Song: The Future is a follow-on project of Song of the Female Textile Worker, which was funded by UKRI Arts and Humanities Research Council and was launched in collaboration between Leeds Industrial Museum, Shanghai Textile Museum, Shanghai Yue Opera House, HUMAN and Megaverse. It was led by Professor Haili Ma at the University of Leeds.

Chris Sharp, keeper of Leeds Industrial Museum, said: “We’re incredibly proud to be hosting such unique performance and to be bringing together the past, present and future of two cultures united by a shared heritage.

“The textile industry has been an industrial cornerstone in both countries and helped shape so many people and places in China and the UK. It’s exciting to be telling and celebrating those stories in such an innovative way.”

Prof Ma, who had a personal experience of working in Shanghai watch and textile factories, said: “I experienced first-hand the layoffs and closing down of the factories. It was devastating for the older generation. Anybody above 45 was made redundant. But it was an exciting time for the younger generation like me, who suddenly had the opportunity to study in the evening universities and choose jobs; the whole world was opening up.

“I wanted to tell the story, the so-called hidden story that very few people still talk about – the forgotten generation, the painful transformation stage from ‘made in China’ to ‘created in China’ and the UK textile industry and its community went through the exact same process.”