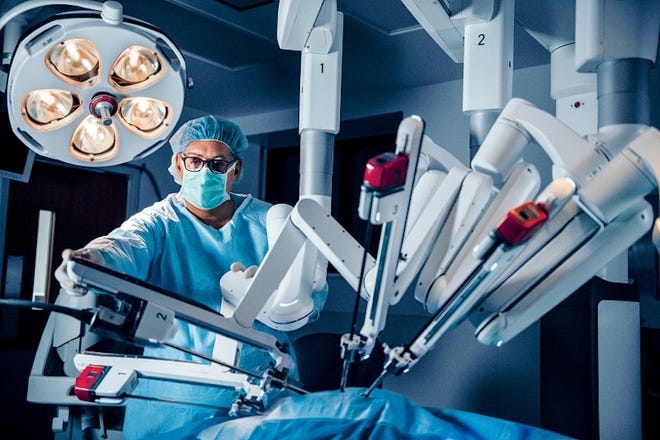 Ten cutting-edge robotic systems are set to be installed in hospitals across the country as part of a £20million investment from the Scottish Government. Three of the systems will be used in Glasgow and are expected to improve treatment outcomes and cut waiting times.

Mr Wesley Stuart, consultant vascular surgeon and chairman of the robot assisted surgery programme at NHS Greater Glasgow and Clyde, said: “This is a win-win for patients and the clinical team. This new technology makes significantly smaller incisions than traditional surgery, reducing the risk of complications and shortening recovery times.

"With waiting times increasing as a result of the covid impact, this will enable us to treat more patients more quickly, and with better outcomes.”

Gary McShane was one of the patients to undergo robotic-assisted surgery at Glasgow Royal Infirmary following his bowel cancer diagnosis in May.

The 54-year-old from Dennistoun, said: “Some of my family thought it might be like Terminator, something out of a sci-fi movie and worried that the machine might go out of control, but that couldn’t be further from the truth.

“It didn’t faze me at all, because the surgeon is still doing the operation except it is a lot more precise with the machine than having two hands in there – so I was actually quite at ease with it, despite being apprehensive about going in for a big operation.”

He said: “The most common treatment and cure for bowel cancer is surgery, which can often be complicated with a long recovery time for people.

"Surgery is the most common treatment for bowel cancer, which is Scotland’s third most common cancer, and central to curing the disease.

"However, this is most often open surgery, which can mean a longer recovery time for patients.

“Using the robot is less invasive and can reduce the time spent in hospital recovering by three to five days.

"We’re always looking at how to improve outcome for patients and in Gary’s case, he was out of hospital after just 48 hours and out for a long walk just two days after that.”