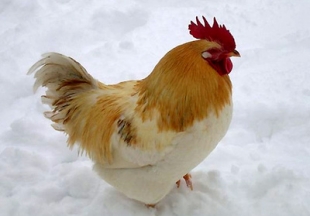 The haunting of Pond Square

This haunting is unique, as it's the ghost of the world's first frozen chicken. On a snowy day in March 1626 Lord Francis Bacon, one of England's first experimental scientists, was riding in his carriage through Highgate and pondering on the preservative effect of snow and ice.

He told his coachman to buy a chicken from the farm they were passing (Highgate was a rural area then), kill it, pluck it, and clean out its innards. Then Lord Bacon began stuffing the bird with handfuls of snow, and stashed it away in a bag of ice.

But the ailing Lord Bacon's fits of vomiting grew worse. He took refuge in a friend's house in Highgate and died. During air raids in WW2, several aircraftmen and residents of Pond Square reported seeing a large bird, unable to fly, running in circles flapping the stumps of its wings, shivering.