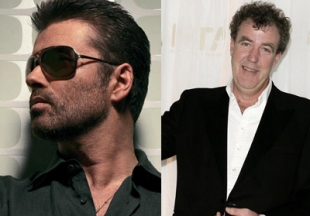 George Michael has been the latest star to fall into the Twitter feud trap, ripping into Top Gear host Jeremy Clarkson after a series of jokes between the pair seems to have escalated into a full-scale row.

It all started when George posted a picture of a pink Bentley on Twitter, joking that Top Gear should become more camp, before dubbing himself a "Top Queer".

Jeremy responded by having a pop at him during a review of a new Jaguar, saying: "It's very fast and very, very loud. And then in the corners it will get its tail out more readily than George Michael."

It's safe to say the former Wham star didn't take this well, tweeting: "Good grief Mr.Clarkson, I wasn't implying your towering heterosexuality was in question. I had no desire to insult you!